Shadows of Brimstone: The Scafford Gang, Nun and Orphans

Continuing the foray into the Shadows of Brimstone wave 1.5, we come to the Scafford Gang proper.

This being the gang of betentacled mutant outlaws that also include the large Dark Stone Brutes from last post.

Colonel Scafford himself heading up his gangers. 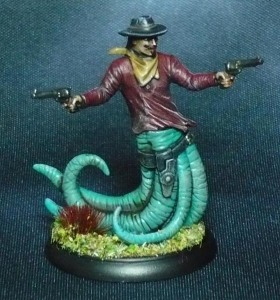 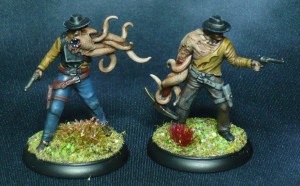 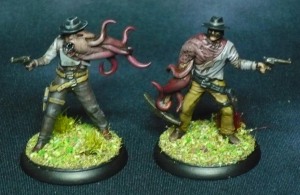 The Scafford Gang are all in HIPS plastic and on 30mm bases.

Also in the Wave 1.5 shipment were a load of resin heroes. These are a major step up in quality from the first HIPS plastic heroes in the base game sets. There were some issues with greasy/oily release agent from the moulds still sticking to the minis. I did get some seriously greasy fingers just by handling the resin. Luckily, all they needed was a good wash before painting, with some extra scrubbing to really get the gunk off. I left the parts on the sprues for this, to prevent bits going astray.

Luckily, the resin it self seems to be quite durable and I had no problems with parts snapping or such.

I used the sprue gates beneath the feet on the minis as pins when gluing the minis to the bases. I cut the gates down to a few mm, put a dollop of paint on each end and put it on the base to mark where to drill. Then I drilled out holes to fit the diameter of the gates. I think it was 2mm. Then I superglued them to the base. Worked a charm. Only way they will fall off the base now is if the actually break.

There were 20 resin heroes in all, a mix of opposite gender variants of the base game heroes and new heroes in both male and female versions.

Here are the first three:

Paint scheme inspired by Lucky Luke from the French-Belgian comic book series of the same name.

Paint scheme inspired by Judy Garland’s Dorothy from 1939 movie The Wizard of Oz and Dolores from the 2016 HBO-series Westworld. 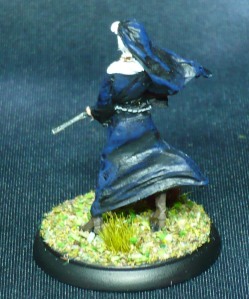 Paintjob inspired by the nuns of the 1992 movie Sister Act. ;P

30mm bases all around.