More from The Others: 7 Sins and Shadows of Brimstone

In the Others: 7 Sins, the agents of F.A.I.T.H. are fighting a losing fight against the encroaching forces of Sin, whose corruption already has manifested in large parts of the city’s remaining population…infesting all social strata from the very bottom to the very top.

Such as The Mayor

Againt the Darkness stand the Agents of F.A.I.T.H., here represented by the final agents of Alpha Team: 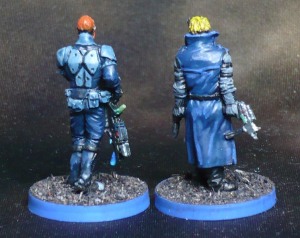 Rocco to the left, Brad to the right. Colours of Betty.

The bases are rimmed in blue to denote their Shooter class.

Completing the Alpha Team and finishing a group of Acolytes actually does mean I have a fully playable set painted up! Woohoo!

Now to get some more Acolytes done, maybe some Beta Team members for variety. And which Sin to do next? Hmm…

All these minis are from the Others 7 Sins boardgame and expanions by Guillotine Games / Studio McVey. They are made from PVC boardgame plastic and have 25mm integral bases.

In addition, I am pursuing completion of the Shadows of Brimstone wave 1,5 minis. I am going to try to do either a group of enemies, or both genders of a hero, or a big mini parallell with whatever others stuff I paint going forward, until they are all done.

Today saw the completion of the three Void Sorcerors: 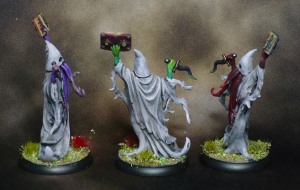 These are from the “Masters of the Void Deluxe Enemy Pack”, which also includes the three Void Hounds I did a few weeks ago. So that completes the minis from that expansion.

30mm bases, made from HIPS polystyre aka “hard plastic”.

All my thin pointy brushes have given up on life and chosed to split, so I am struggling abit with thin lines these days. While waiting for some new brushes I have ordred to arrive, we get a bit shoddy with the freehand symbols such as in these books. It should still be possible to make out which symbols I have tried to paint in each of them though. I hope.