Shadows of Brimstone: The Lost Army

Traveling back to Shadows of Brimstone for a bit. This genre mashup game includes some Napoleonics in the expansion “The Lost Army”. The expansion packs each contain a new board tile, mission book, some cards and 12 soldier miniatures. The bits and minis can be used in any game by adding the cards and then randomly drawing the encounter.

Undead Napoleonics at that! Well, in the lore they are supposedly part of Santa Ana’s Mexican legion, lost over 50 years ago looking for Darkstone, Now they are back with a vengeance!

I prefer them to be French and imagine them to have been campaigning through some sort of hellish otherworld that sucked the life out of them but left them animated.

The paint scheme is loosely modelled on the Garde Impériale of Napoleon I with blue coats, white trousers, black hats, red plumes and gold details.

Six each of two different miniatures. 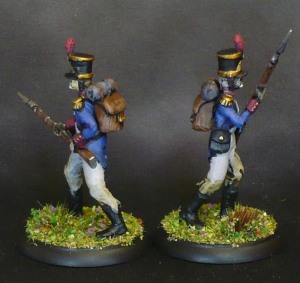 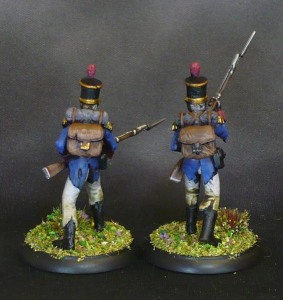 Yes it is quite rough and sloppy painting, but then again the minis are not really all that detailed. There are many of them so this is mostly churning them out. As board game pieces they work well.

I have intentionally not rusted or dirtied  them too much up. They do have grooming standards, you know.

from Shadows of Brimstone, The Lost Army Mission Pack, 2015

And there is a stand alone expansion to the mission pack with the Hell Cannon and Crew! 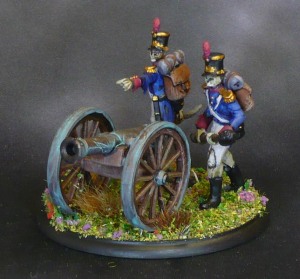 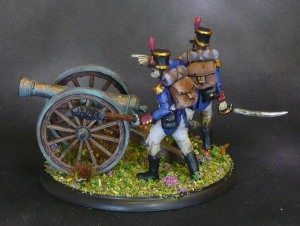 The Hell Cannon is an XL enemy, and up to three can be enountered at once at top threat rating. I only have one though.

The Hell Cannon and Crew

expansion pack for Shadows of Brimstone, , 2015