The Zen of Moria Goblin Spearmen

Sometimes all I want to do is to Zen out when painting. For this I have found that batch-painting a large unit of whatever is a good way to reach the flow state where the mind is disengaged.

This time I did a 20-strong unit of Moria Goblins for my planned Kings of War goblin army. 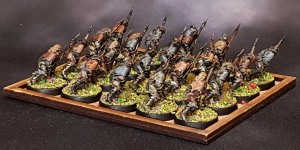 I have a goodly quantity of the old plastic Moria Goblins from the original Lord of the Rings Fellowship of the Rings miniature game (Imagine that is is almost two decades since it was released! I am getting old) that I have gotten on the cheap off Ebay and wherever over the years. I have based them on 20mm rounds as I think they fit them better than 25mm rounds, and also to conform to the official Kings of War rank and file size for goblins.

At any rate, the plastics are so-so and pretty terrible by todays standards, even though they were quite good at the time. So they are good for the batchpainting zen and not much else really.

For this I went with three main colours, a brown, a flesh and a denim bluegrey that were painted a bit differently on each mini, plus plate metal, black, grey and sand for hair and details. Shades with Army Painter Strong Tone Quickshade and drybrushed very lightly with light grey. Done in an evening, based the following day.

The Lord of the Rings Strategy Battle Game

Finished from the stash: 215