Shadows of Brimstone: The Burrower aka we have wormsign! 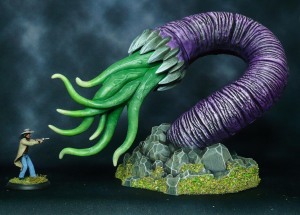 Not content with making a massively large monstrous worm to harass the heroes, the makers of Shadows of Brimstone gave their worm the obligatory cthulhoid mass of tentacles sprouting out of it’s gigantic maw! Try stopping that with a six-shooter…

For some reason, it ended up mostly purple. I think the red should have been a bit more muted, towards brown. Maybe I’ll go back and give it a darkening wash or three to correct that redness. But for now, it’s done.

Also, this made me think of the movie “The Burrowers” a western horror monster-thingy. I liked it alot, and recommend it heartily. It is not for the faint of heart, what with being quite graphic and brutal in parts.

There is no base as such, it is slightly more than 10cms across the bottom part.