Shadows of Brimstone: The Scourge Rats

Taking up some of the slack on Shadows of Brimstone, next up is the Scourge Rats and their three-burrowed nest.

These are small enemies, and as such, there are a lot of them. 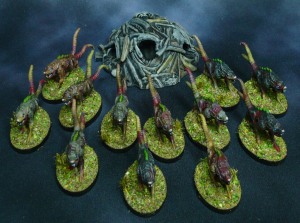 A dozen of the little blighters, to be precise. The Scourge Rats are mutated by the darkstone making them them big mutant monster rats much larger than normal rats, and with two tails a piece and a back ridge of poisonous spines.

I chose to make mine zombie mutant monster plague rats, on account of details on the minis that I interpreted as wounds and open ribs.  Alternatively the very blue eyes might be seen as your typical mutant warp-frenzied crazy shining through.

Each of the 12 rats has its very own different color combination!

I did them in four different base flesh colour variants and one each of those with black, grey, brown and tan fur respectively. Some detailing, red and purple gore and then a wash with a mix of army painter quickshade strong tone and green tone (the mix ratio being a small puddle of the first and a few drops of the second…)

When dry I did the mouths and eye cavities in black before giving them all a very light drybrush with reaper MSP vampiric skin, before dotting in some teeth with the same vampric skin. A bit of Vallejo Game Colour Magic Blue topped with and old Gamecraft Turquoise (which is a very  light shade) in teh eyes, some old Hobby Games Products (same paint as the really old citadel) Emerald on the back spines and some reaper MSP Brains Pink for the tips of the noses.

The different base colours serve to individualize them, while using the same wash and detailing colours together with similar basing serves to tie them together as a cohesive unit.

These were prepped and based with 30mmx20mm oval bases from war-bases.co.uk long before I got my 3D printer, or else I would have printed lipped ovals for them as well.

In the game, the nest is not just window dressing, but an immobile XL enemy that can produce more scourge rats and as such poses a major threat to the heroes as they might suddenly get overwhelmed. The rats are fast and have very high initiative. An unwary hero can rapidly be nickled and dimed to death.

The nest is roughly 6x6cm and takes up four squares on the board.

from the expansion of the same name for