Still on target for February: 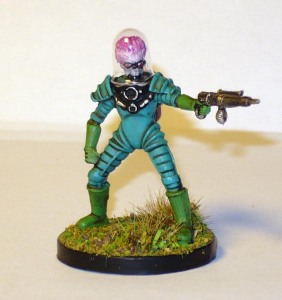 This is the test piece for the paint job. The colour scheme turned out to be quite quick and easy (thank god for that!)

This mini is one piece PVC slightly soft plastic (a bit like Bones, but stiffer), I have actually not had to cut off any mould lines apart from on the sides of the base (high five!). I quickly decided to treat these more like board game pieces or toys than minis and not bother with what little mould lines there are. I am actually quite impressed with the quality considering the material. 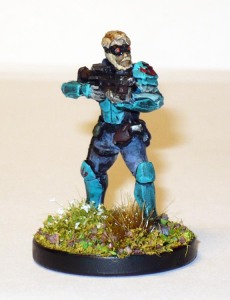 I started out trying to be reminiscent of the Rebel troopers defending Leias ship in the beginning of Star Wars, but that did not turn out well. What followed was a slightly too fast repaint. At least it is not in any colour scheme any of the other factions will have… and rebs being such a diverse collections of individuals, I am going to do them in wildly different outfits / paint schemes anyway. This one will be called George.

The base is not actually finished, I am waiting for some black scatter I have ordered. 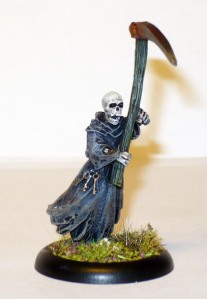 Cause I just love those classic Warhammer sculpts. And wonder how on earth this one did not fall over all the time on the microscopic 20mm base it was packaged with.

Mantic Zombie and Ghoul parts. And the lower half of a corporation trooper.

And singing: a One -Two -Three, a la dee dee, Eric the half zombieeee!