Staying on target for Februrary:

Space Hulk / Warhammer 40.000 Tyranid Genestealer. Painted in the same vein as one I did earlier, this is an exeptionally speedy speedpaint, only taking a few minutes to finish. Several others are on the “assembly line” waiting for some paint to come their way.

6. Finish something that currently stands around half-done on the shelf of shame

Who doubles as a coach for my Team Toasters Robot Dreadball team. Hexen Phaedra is obviously a homage to Caprica Six from Battlestar Galactica.

Too bad that Studio McVey messed up the scale on many of the wave 2 minis like these. They are far to small and spindly.

These would have been easier to paint with a white or grey undercoat rather than black. 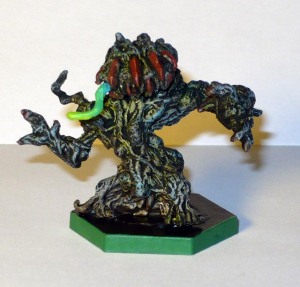 The first of the DBX free agent minis to be painted. The colour variations are not really visible in the pictures.

Green base edges as it is a Jack. 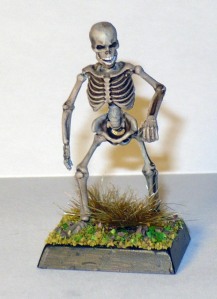 Test piece. The Wargames Foundry skeletons are really nice, but the parts are thin and the joints only points. The right arm keeps falling off!

I painted this simply by undercoating in bone, and Soft quickshade ink. Then some light grey for teeth. Nothing more.

Good thing this very simple paint job works, I do not think it would have stood up to drybrushing at all. The right arm kept falling off as it was.

Reaper Bones canine from 77176: Familiars pack. I did this one as a fox, even though it obviously is a large dog or a smallish wolf. 20mm mantic base. 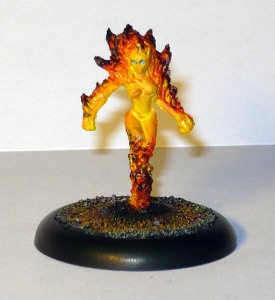 A smaller version of the medium fire elemental.

How to paint a scorched earth base:

Actually quite simple.
A layer of fine sand is glued down with thinned pva.

Wait until dry and then wait some more to make sure. Some sand always loosens when the paint is wet.

Then dry brush in “rings”following the curve of the base. I did yellowy bone colour first, on the middle two thirds or so, with less on the outermost part.

The bone is a base coat that gives strength to the next coat, bright yellow. I often use bone under yellows (and brown under golds, blue under silver etc)

And that is that.