Another inbetweener: The Brass Bull. out of the Bully for you subset in the Bones 2 core set.

This is a not-Gorgon from D&D. I do not know why Gygax would call this a Gorgon, since it really has nothing to do with the Gorgon sisters from Greek myth. But what it is, is a massive metal bullock that has a petrifying green gas breath attack.

Even though the Gorgon is described as iron, in that it can be rusty, I did it in bronzey brassey colours.  I gave it a bit of green around the muzzle to look like some residue from it’s halitosis. 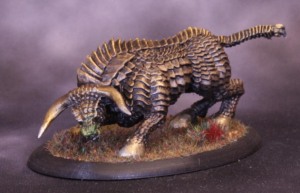 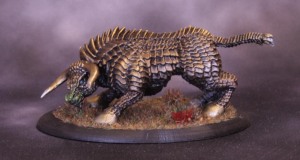 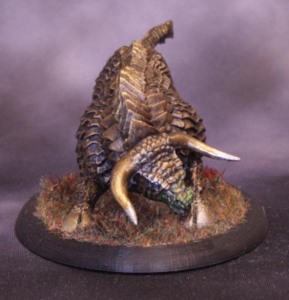 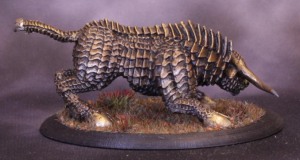 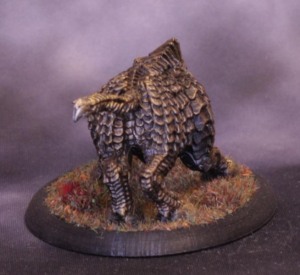 This was painted for an easy and quick finish. Starting with black undercoat, I drybrushed it heavily with Vallejo Tinny Tin, then lighter with Scalecolor Necro Gold, and more lighter with Vallejo Model Color Brass. A bit of Army Painter Shining Silver for the sharp bits on the horns and hooves, and very light highlighting here and there. All done with drybrushing. No washes, layering, wet blending or any other fancy-schmancy techniques used.

A bit of thin greenish leftovers from my palette around the muzzle.  The eyes were in Vallejo Light Turquoise and some other blue mixed with white.

The base is a 80x55mm bespoke 3D printed lipped oval, a few tufts and some of my new autumnal flockmix, and hey presto!

In other news, The Lead Painters League round 1 is live!

Towards later rounds I have completed the first larger centrepiece-type model for a future team for the LPL13, a crewman for a second, and done a test of a new colour combination recipe I want to use for yet another team. Next up is an assortment of infantry types for the first and second teams, and get started painting another large centrepiece for the second that I have spent far too long building. I find that old metal kits can really be a pain in the posterior. Especially when inadvertantly sat upon.

And with the revelation that the next round I need to deliver will go up for voting on the week of Halloween, the direction of that team has changed significantly. I have ordered in a couple of new models to go with minis I have lying about to make a team I hope will fit the bill. Lets hope it gets here in time. just under 4 weeks until it is due.