It has been a busy week with not much time for hobby, so this post is later than it might have been.

Round 4 of the Lead Painter’s League had the optional theme of a support weapon with at least four crew.

Here is my entry:

This is a Goblin Man-Mangler by Crooked Claw miniatures, a small company specializing in producing new Goblins sculpted for them by Kev Adams, the Goblin King. So named because he sculpted the Warhammer goblins and orcs with his signature comic style that became so very popular back in the day when miniatures were lead and plastics were rare and resin unheard of.

The new goblins he sculpts are in the same Oldhammer style and a joy to paint.

Two of the goblins, number 2 and 3 from the left, are slightly converted from infantry to be crew, as the artillery set only had 3 crew originally. All are still Crooked Claw, though.

For this entry I 3D-printed a 16cm x 11cm oval base (which is about as large as my printer can make) and arranged the models around the artillery piece. 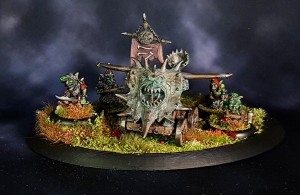 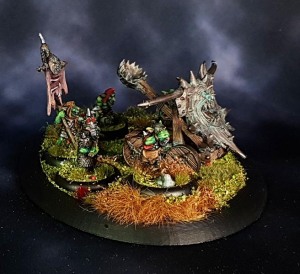 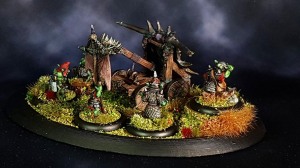 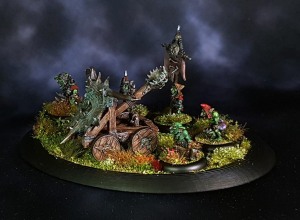 I built up a small hill for the pointer using three misprinted bases and some plastic putty.

After painting, I found it was nessecary to fix the mangonel to the base as it kept sliding around. So I drilled a hole into a wheel and the base and glued it down. The goblins are individually based on 30mm lipped rounds and not glued down to the larger base. I used small loops of sticky tape to hold some other bases in place when I did all the tufts and flockmix.

The round went well for me.

This was painted in May.

Finished from the stash: 99