The fourth round of the Lead Painter’s League has a “support weapon” theme.

I painted the following with this in mind, but I ended up entering something else instead.

The Sledgehammer BFG by Victoria Miniatures via the Reaper Bones third kickstarter.

I have not actually painted any large vehicles or similar kits like this in a very long time, and have never really tried my hand at weathering or any of that lark. So the results are not all that either.

At any rate, I was not really satisfied with it and decided this wasn’t really good enough for the league, so I painted up something else instead that I managed to deliver in the knick of time.

Also, I think I should have done the piece in a different color more consistent with the uniforms I ended up doing, maybe added some camo netting or something. Also I probably should have looked into how to do weathering properly -I don’t even have a sponge. And maybe I should get my airbrush up and running again. Oh well.  It is perfectly servicable for the tabletop. 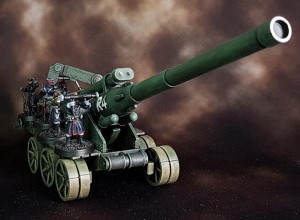 The crew backside pictures were all too blurred to use.

The gun and carriage are in hard polystyrene HIPS plastic, and quite straight forward to build. Parts fit together fine with little or no flash to speak of.

The crew are in bones material, and the rubbery type at that. All apart from the range finder part are one piece, with tabs beneath their feet to fit seperate slotted 25mm round bases in a similar style to 40k. There is also a large oval base for the piece, but I did not use that here.

The range finder-piece was completely wonky even after boiling, and I ended up having to drill through it and insert a pin to get it to be something approaching straight. The crew are slightly smaller than similar models from the Imperial Guard, sorry, Astra Militarum from Warhammer 40k which this model clearly is meant for.

Finished from the stash: 87