Polishing off the rest of the elves from the bobbybox today.

These were done in much the same fashion as the spearmen: Basecoated with Vallejo Model Air French Blue (I have made a mistake and written the wrong name of the paint in the earlier post, sorry about that. I can feel my memory going, Dave. Please stop, Dave. Shall I sing you a song? Daisyyy, Daaaiiisssyyyyyyy…)

All I did differently from the spearmen was to reverse the colours on the shields, and do the bows in mainly gold. 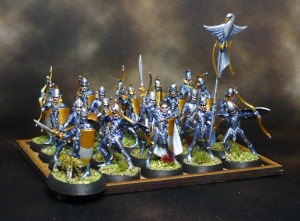 When I originally looked at the sprue, I did not see that the big cat was to be on the same base as one of the champions. This became apparent when I built them, though. But my small 20mm round bases were not wide enough for the cat’s stance. 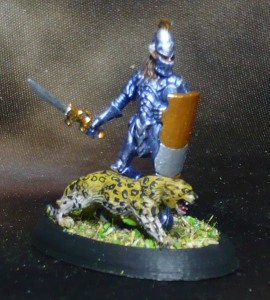 So I based that figure on one of the plague hound bases I had left over. Now the cat fits, but the mini does not fit in the movement tray, and looks a bit odd there on the end. No matter, it works. However, if I ever do any more of these, the cat will get it’s own base.

…and I should not have glued them down before painting. It made it rather difficult to get at some bits.

The elves did not want to be photographed today. They mumbled something about the pictures stealing their immortal souls or something, and kept moving about, blurring all the individual pictures. So there are none to show off here. Not that the paint jobs are worth going on about anyway, so it is not a big loss.

…and the three elves that refuse to participate in the violence and protest by lying down dramatically. Bloody poseurs, the lot of them.

Also today I did the Dungeon Saga Orc Mawbeast:

These are so leonine, what with the mane and all. So, naturally, Lion.

I have painted three of these from before, and did this in the same style but different tones so they are not all the same.

This one also did not want to be taken a picture of, and this is the only pic that is not too blurry.

As I have not finished most of the other Dungeon Saga Orcs I have from before, I am thinking maybe I shall do them at the same time as the bobbybox ones, making it four of each mini to do. This way, I will try to use the impetus to do them while I still have said impetus. if not, I fear they might never get done as other projects take my fancy. (I find my interest in continuing the bobbybox is somewhat challenged by Mythic Battles Pantheon that just arrived…)

Anyway, (most of) the greenskins and abyssals are all that remain to do from the Dungeon Saga kickstarter, so this should cut that down to just the abyssals. Which is a good thing. Maybe I even will be doing the Dungeon Saga Abyssals in parallell with the four remaining Kings of War Lower Abyssals from the bobbybox, and get all the Dungeons Saga done in one swell foop! If I can manage to hold off diving into the world of greek gods and goddesses…hoo boy. Not going to be easy. It is almost a good thing that the Rise of the Titans was missing, as Typhon is the one I am most looking forward to and I do not think I could have held off on him very long. Lets see how much I can get done until the replacement shipment arrives.

Finished from the stash: 4

Finished minis in total this year: 58 / 365 (target one for each day on average)