And now for something slightly different

A change of pace today.

Since doing the Bobbybox plague minis, I have been rummaging a bit through the boxes of Deadzone minis, and I have dug up some old fossils…

The imposing 1st generation plague victim. What happens is that the first person to get infected by the Plague in a given cycle, turns into a horrendous monstrosity, growing several metres in height and width, it’s new massively muscled frame covered in a bio-organic spiky exoarmour. In it’s new form it is extremely intelligent and powerful individual that sets out find others to infect. These new victims turn into the 2nd generations, each much smaller than the 1st gen, but still ogre-sized. These again infect the 3rd gens that we have seen. The 1st and 2nd gens do not use technology or weapons, relying on their rock hard exoarmour and brutally strong claws to do the dirty work.

I found that for some reason, I had started but not finished painting my 1st gens.

The one to the left is the restic standard 1st gen model. The one to the right is a resin kickstarter exclusive freebie for those who spent an obscene amount of cash on the first KS. (of which I remain guilty as charged…)

One of the resin mini’s fingers had broken off during storage. That’s what happens when it is put loose in a box with other minis, and that box is part of an avalanche in the Mountains of Minis. (At that point I might have said a bad word.)

I managed to make a new finger by carefully applying some plastic putty in several stages. Can you see which it is?

The resin one is slightly larger than the restic one. I believe the restic shrinks a bit more during casting. 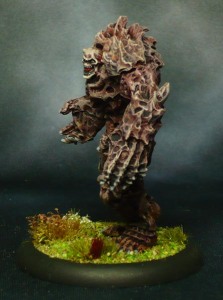 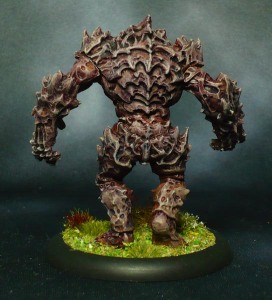 They are painted much the same way as the other plague models:

Reddish-Brown basecoats, several careful drybrushes with shades of beige and skin, globbing on a generous wash with citadel druuchi violet ink and some carroburg crimson ink in places while the violet is still wet. Two thin coats, pah! Glob it on I say! take care to not let it puddle too much though.

When dry, drybrush again with several skintones. Some more carroburg crimson here and there for muscle-effect.

Dot in the eyes and teeth in white over black. red for the tongues.

I mounted them on 50mm lipped round bases I had lying about. Looks much better than the 40mm flats they came supplied with.

for Deadzone and Warpath.

But wait, there is more! 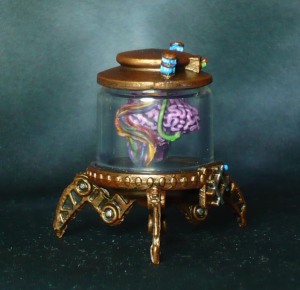 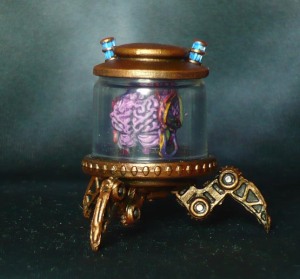 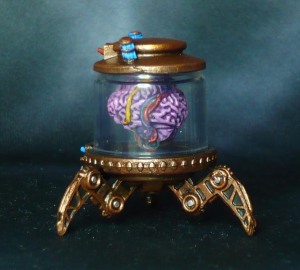 It’s a Brain in a Jar! I have always wanted a brain in a jar. So I can have a safe place to keep the moonshine, you can be quite certain that nobody is going to mooch off it when it is in there together with that thing…

This one comes from the Reaper Bones 3 kickstarter and I simply could not wait any longer to paint it.

It is a giant brain, though. The legs stand at about 5cm in diameter.

Finished from the stash: 4

Finished minis in total this year: 37 / 365 (target one for each day on average)