Shadows of 7 Sins and see-through minis

‘Tis the first week of Christmas, and time is scarce in the face of working at a shop and my sons birthday celebrations.

But I have managed to squeeze some painting in now and then, resulting in these:

First, a recap of how to deal with translucent minis:

Clear minis are best painted by undercoating with a matte clear varnish and then using transparent paints such as inks.

As this mini does not seem to be released as of yet,  I do not know who sculpted it or what it’s code or official name is. Probably some sort of Sylph or Fairy.

At any rate, it is from the “air elemental” add on pack in the Reaper Bones 3 kickstarter and is made in clear, translucent plastic. The wings come as a seperate part that plugs right in to the back. 30mm base.

I have recently bought a few packs of Nolzur’s Marvellous Miniatures, the unpainted range of minis made for D&D by WizKids.

Here is the first pack I have painted: 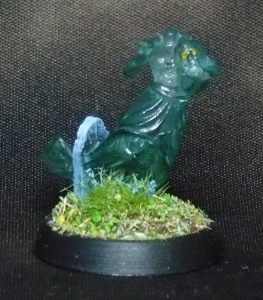 These are both made in a clear, rigid plastic (Much harder than Bones; the arms of the banshee can flex a little, but not any other part). And they come primed.  On these the bases and the gravestone were actually painted with primer, while the rest were clear(!). I suspect they might have primed the rest with clear varnish, because I painted these with inks withouth priming them myself first, and the inks went down a treat. Absolutely no problems with the plastic rejecting the inks or strange pooling patterns like I would get with inking straight onto Bones or basically any type of plastic. If they are NOT primed with clearcoat at he factory, but are just the plastic…well, in that case colour me impressed with this material!

I just slapped some inks on these. On the Ghost I used ModelMates “mould weathering liquid”, which seems just is a fancy name for “dark green ink”. It may have other properties than normal inks, which I am looking forward to experiment with. I bought it cheap together with the pack of minis at Black Friday.

The Nolzur minis are slightly smaller in scale than Bones, and significantly smaller than Warhammer minis. These have been based on my own 3D printed 25mm round lipped bases.

For The Others: 7 Sins we have the Controller of Envy… 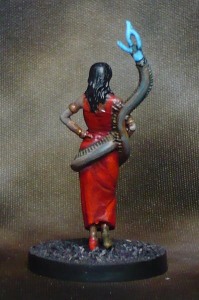 I tried to give the tendrils a sort of deep sea fish bioluminescent look. They do look better when not magnified as in the photos.

…and the Corrupted Police Acolytes: 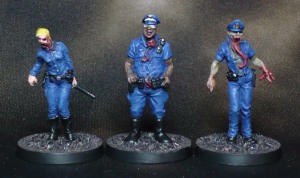 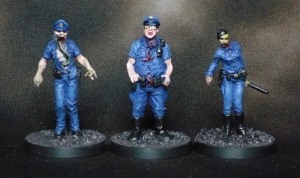 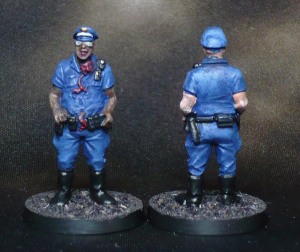 For Shadows of Brimstone, our Heroes have encountered some strange alien uniformed warriors from beyond the void portals, bearing powerful guns and sharp swords. These are the Raiders from Trederra, a world locked in a perpetual war with a tech level similar to the battles in the trenches of World War I on Earth), and where raiding parties are sent through the void portals to gather supplies, tech and weapons to use in said war. 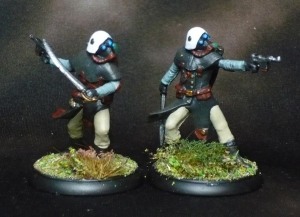 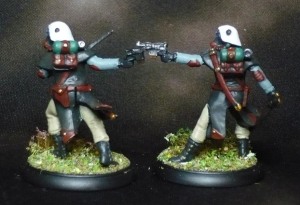 I first painted them in green similar to british uniforms of the trenches, but I did not think it worked (too samey and bland all over). So I went with the helmet shape, that suggested I look to Star Wars rebel troopers for uniform inspiration. Also Dune.

The Trederran Raiders come from the Trederra Deluxe Expansion ( I got them in the wave 1,5 without any of the other Trederran types, maps, scenarios or other bits that are in this Deluxe Expansion. The rest will be arriving with the wave 2 that currently are shipping abeit at a slow, slow pace. I had hoped to get mine before the end of the year, but since I have not gotten any shipping notice, that probably won’t be happening.