Shadows of Brimstone: Trun Hunters aka the Visitors

These are from one of the three enemy expansion sets that were added to the KS as paid add ons in the pledge manager, as the stretch goals for them were only just not reached… so they made them anyway and charged extra for them.

As I wanted the lot, I added them, using some of the late minecart credit I got. The Trun Hunters were delivered in the wave 1.5 shipment, and are one of the few enemy types yet released that have a ranged attack, which certainly changes the dynamics of the game. 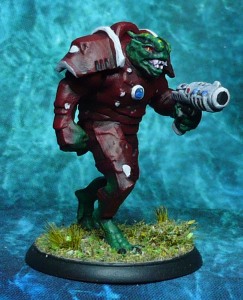 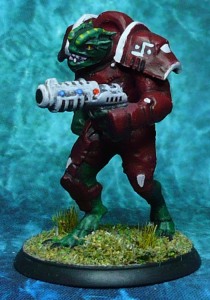 and there are three of them in the set: 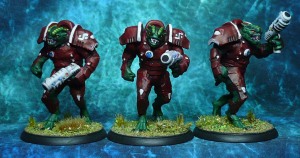 Since we all know what lizardlike aliens like to eat, we know exactly what they are hunting for, don’t we? I wonder which 80s TV show these minis remind me of?

Incidentially, this is where Shadows of Brimstone most markedly moves away from it’s Wild West starting point, passes through the Tentacular Horror Void of the Dungeon Dimensions and lands squarely in the Twilight Zone of Sci Fi Mash-Up country! Pew Pew! Even more so than the WW1 type Trederran Raiders, or even the wintery Targa Otherworld where the ancient robotic guardians are stirring…Yea, verily, the void portals lead not only to other places, but also other times.

Painted so far this month: 17