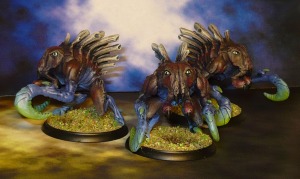 The three Slashers from Shadows of Brimstone Swamps of Death. Giant Lobster Ogres, much like Mirelurks. I have been putting these off because I could not decide on a paint scheme. In the end, I decided to start them off as vaguely lobster-like and just wing it. I think what I ended up with works well.

Painted so far this month / year: 31  (which is the target for January! Only one week in! Woohoo!)