At the very end of the Lost Valley, the bossfight: Clubtail! 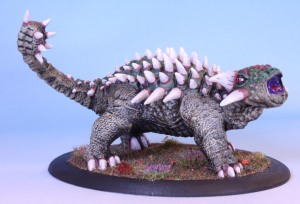 A plant eating 4-ton tank armed with a deadly morning star tail, an armoured hide with spikes: a fantasy version of an Ankylosaur. The Clubtail is somewhat larger than the fossil record of Ankylosaur supports. Also the spikes are overstated in comparison. A lot.

At any rate, the Ankylosaur was contemporary with the Tyrannosaurus Rex and the Triceratops. All are from what is now North America in the late Cretaceous period, roughly 68 million years ago. It needed that armour.
But the question remains: What did it use the club-like tail for? To smesh predators? Rivals? Trees? Make gravel? An impressive display to attract mates? All of the above?

And the clubtail has spikes. Did I mention the spikes? 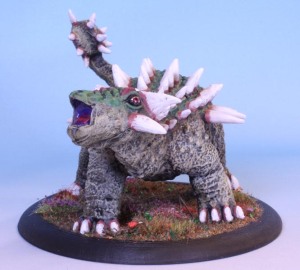 I detest painting spikes. It takes absolutely ages and I invariably lose patience and botch the job. These look OK for tabletop but do not stand up to close scrutiny at all. At least it is done. Together with the entire Lost Valley Expansion! Woot!

The Clubtail is, in fact, the distant forebearer of the modern day Dragon Tortoise aka Koopa.

from the Lost Valley Expansion

Made in Bones Black PVC