For the Modern Fantasy Painting Party

The lead adventure forum is back with a painting club, this time the theme is Modern Fantasy.

Now, the phrase “Modern fantasy” makes me think of neon-lit vampires or the kind of books with steely eyed male models (or just their steely ab’ed torsos) on the cover featuring stories about werewolves that happen to be both sensitive lovers and single, a perfect catch for the female perspective character.

I am very happy to determine that is not at all what this paint party is about.

“Modern fantasy” here is a fantasy miniature released this century. I.e. the year 2000 or newer. This might say something about the age-range of the forum members…

The rules of the painting party are roughly that any member of the forum may enter a single picture of a mini that fits the theme, up to once every 24 hours. When 100 pictures are up, the party closes. During this crisis they have upped the quantity to 200 pictures. The pictures / painted miniature must be previously unpublished.

I like to join in with a picture or two. When I found out that another painting party was running, I started looking at my models that might fit the bill. My, my are there a lot of them!

So I thought, maybe not an oldschool style mini either. Let’s go with a recently (like, last 5 years or so) released model that looks digitally sculpted  and also is made in a modern material. That means no metal or HIPS. Yes, I know there exists resin minis from before Y2K (I have quite a few) but there really is a significant difference in the old resin and newer types of resin. And it’s not just the smell. Those old ones shatter like glass. Many newer resins can bounce to safety.

Now PVC is certainly a modern material. Any Bones model would have done, since they are all newer than 2011 or so. Restic? Boardgame plastic? Finecast? Trollcast? All these materials came (and some went) the last two decades.

I probably should have chosen some of the above. Instead I went with this resin mini by Mantic. Since Mantic opened their own in-house resin casting department, they have been delivering a lot of excellent minis in resin. I have a few. Lord knows their metals have been of variable quality, but the resins I have got from them have been good quality casts with little or no problems.

So here is a thoroughly modern fantasy mini: 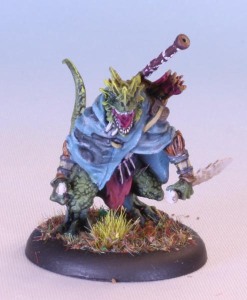 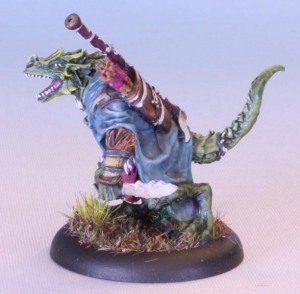 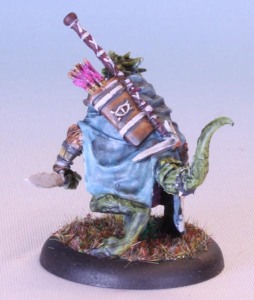 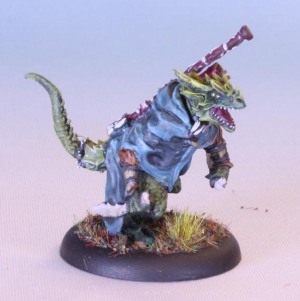 from the Kings of War “Edge of the Abyss” summer campaign 2017.

In my mind it was “last year” How time flies.

I bought this together with the other resin special characters for the campaign in a lot off the same forum some time ago.

Of course, what I really should have done is whipped out a 3D-printed mini…