This is one of Mantic’s earliest metal minis, the “limited editon” Orc Shaman from 2011. It was AFAIK not available by itself, but added to army boxes, deals and so forth and I believe I got this from the first Kings of War kickstarter in 2012. Or an army box with orcs.

Today, it is on their website and can be had by redeeming 25 mantic points through their points scheme. It was known for a while as “Wip the Half-Caste” but now is back to “Orc shaman” I suspect the “Wip the half-caste” name is some sort of internal Mantic joke.

I must admit I have always found this model to be rather busy and difficult to read. There seems to be so much going on. 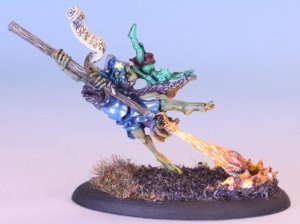 Getting some colour on him certainly helped in that regard. Still a bit busy though. It certainly is a unique model. I like it.

The bow wave of fire was made in putty, and I printed a 60x35mm base for him.

I painted the orcling a starkly different green on purpose to make it stand out and thereby reduce the busy-ness a bit.

The script on the scroll was done with a fine tipped pen.

available from manticgames.com as part of the mantic points scheme.