My photography has really been sub par for some time so I am trying out som different settings on the camera, including changing the backdrop to try to find a setting that works better then before. Focus is key, deep focus is even more key.

I think I might just have cracked it. At least for now.

The dark background has it’s uses, but did not really work for these models. 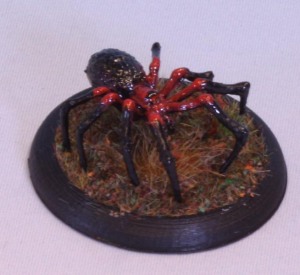 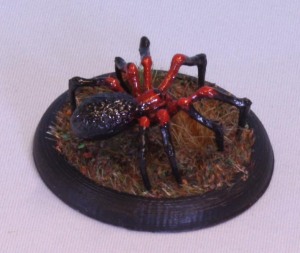 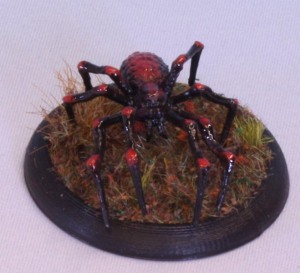 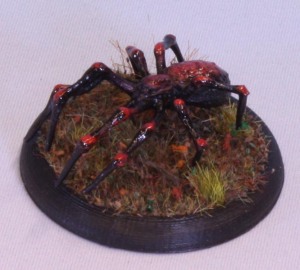 These spiders are a little bit too similar to the real ones intermittently crawling across my walls both in size and shape, and I have had to stop myself fixing to slap them as they were lying about my desk.

I made 40mm bases for them. One of the spiders came with a webbed victim-piece, which can be seen above.

Super fast paint scheme, gloss black all over, with red in three shades for the red bits, then gloss varnish.

The colour scheme is inspired by a real spider, the Australian (…because of course Australian!) Ambicodamus Crinitus, aka the Red and Black spider, Imaginative naming there.

Luckily the real red and black is no more than a centimetre or so long and not seen as dangerous to humans.

One of the models had a piece missing from one leg. I could not be bothered with complaining and requesting a new one though.

Have you seen some dwarfs that were strolling through these woods?

Also, as is usual with the Nolzur line, the renders used to promote and illustrate the minis in webshops come across as way more detailed than the actual models. Something which I think actually is a bit disingenuous, really.