Round 8 is over, and I was matched with the overall league leader this round. In light of that I am quite chuffed at getting over a third of the votes 🙂

Being a band of bony retribution soon to cross the Brandywine and come a-knocking on little round doors under the hills.

Most of these skeleton minis are from the same second hand purchase where I got the zombies that were featured a few rounds ago. I got the incomplete undead mammoth off Ebay several years ago, and Short Wart himself is an Oathsworn Halfling Necromancer. All minis have been given 3D printed bases, most of them 25mm. 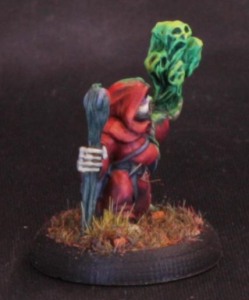 Short Wart, or to present his given name “Martram Slyberry, Halfling Necromancer“. This mini is from Oathsworn Miniatures’ 2013 Heroes kickstarter, delivered back in 2014.

Martram was always the strange boy, shorter than the other children and bullied to boot. They called him Short Wart. One day he had been chased around again, he sought refuge in the Old Barrow Woods where the other children were too afraid to go. Whilst hiding in a hollow beneath a blackened, giant dead oak he heared strange whisperings. Entranced he crawled deeper into the hollow, pushing past tangles of roots to find a cave of sorts, with a Big One skeleton holding a small ball. Drawn to the ball as if in a dream, when he took it, the world exploded in all colours then black.

Pal wanted to see, so he picked up a likely piece of the Black Oak’s roots, the rootlets on the end bending to grasp Pal like a claw, forming a staff just his height.

Pal wanted out of the cave, and with a puff of bright green smoke showed him how to make the Big One skeleton move and dig.

They emerged to the night, Pal leading the way deep into the woods, the skeleton shuffling silently behind. After walking for several nights they came to a clearing in the forest. Short Wart could feel it. This was a place of true power. Here there had been many deaths in times gone by. Here lay the bones of fallen warriors…and something larger.

He could hear Pal speaking to him inside his head: “You always wanted to see an Oliphaunt…oh, we have such sights to show you!”

Oathsworn Miniatures, from the Heroes kickstarter 2013

no longer available as far as I know 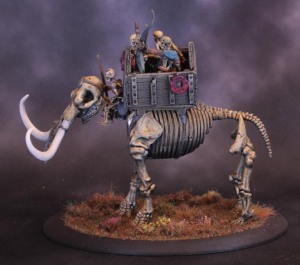 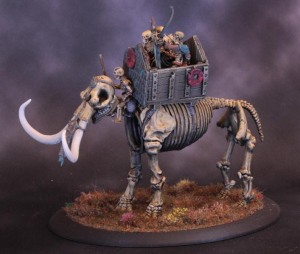 War Mammoth of the Undead Legion by Grenadier Miniatures, a Masterpiece Edition from 1984.

I bought this second hand off ebay some years ago, and it has been -like so many others- languishing ever since. There are bits missing when compared to pictures of the original, such as a banner, a bell-and-skull hanging part, and all the crew. Also, half the trunk is gone.

It did not go together all that well, and the howdah is perched at an angle as a result. I actually think it enhances the ramshackle look, as the ropes would be loose after all the flesh has rotted away (but somehow the ropes have not rotted all that much…it must be magic ;P )

It came in pieces, some broken, all needing TLC, pinning and prodigous amounts of patience. There were some really bad mould lines that needed some serious filing.

I made a base for it, managed to put it together and crewed it with skeletons from another source. The mahout is an old Citadel plastic mounted skeleton from the late 1980’s Skeleton Army set I had in my box of my-ancient-minis-I-need-to-spruce-up-a-bit.

Painting the ancient bones: (the following method applies to the human-sized ones as well)

I start with a solid black undercoat and a zenithal white /grey. I used Amsterdam Titanium White acrylic ink through my airbrush for the zenithal.

Using Acrylic Artists Inks is a new one for me, I came across this concept in several youtube videos not too long ago, and decided to try for myself. I have not done too much with them yet, but so far I find the white to be excellent for the white zenithal, as it goes down super smooth and does not block the nozzle at all. The inks do not seem very durable on the models though, so be careful when painting over so not as to make scuff marks or such. I would not use black ink for the very first primer for this reason. The ink needs something to adhere to for strength.

At any rate, after the white zenithal was bone dry, I used Citadel Contrast Skeleton Horde.

It turns out that Contrast paints are not great for large, smooth surfaces as it will pool and leave tide marks whatever you do. For textured surfaces such as the smaller human sized skeletons, they are great straight out of the pot!

When the contrast paint was dry, I gave a second coat here and there as it was rather patchy and I had missed spots.

Later, I brushed over in varying degrees of thickness of paint, dryness of brush and applied pressure with several bone colours, going from darker to lighter. This had both the effect of covering the worst blotches and smoothing the gradients. When doing this it is important to be mindful of the shading, or the effect of the zenithal will be lost. I find using thinned paints but many consecutive coats help alot to keep some transparency.

The tusks were done in whiter bone colours. but I lost most of the shading as they were much more opaque. Oh well, can’t win them all. 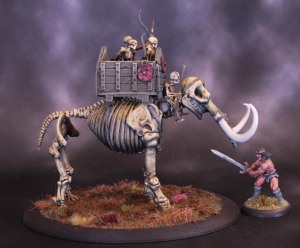 It still only counts as one!

The Howdah crew have been identified as being from the selection “FW1004 Skeletons” available from North Star Military Figures although I do remember buying some of these sculpts from Harlequin Miniatures back in the day, before Harlequin redid their ranges to be slotta based.

War Mammoth of the Undead Legion

Grenadier Miniatures, a Masterpiece Edition from 1984.

no longer available as far as I know

I needed all my Google-fu to find some of these… 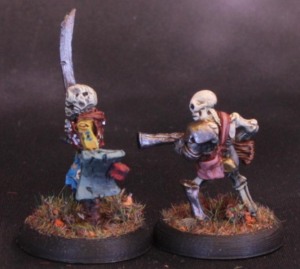 To the left is Zol from the C18 Undead Samural range by Citadel Miniatures. mid 80’s (found in the 1986 catalogue)

To the right is Gunner from the C17 Skeletons range by Citadel Miniatures. mid 80’s (found in the 1987 catalogue). Sculpted by Aly Morrison. 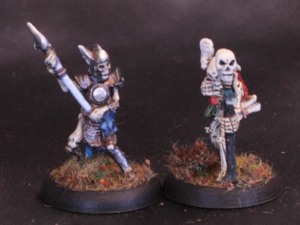 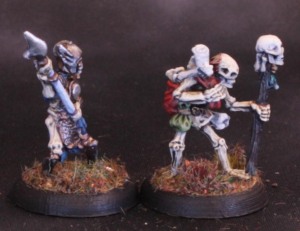 To the left is a “cast your own skeleton” model, by Prince August,  mid 1980s. (Sold as moulds, not figures)

To the right is Wanderer from the C17 Skeletons range by Citadel Miniatures. mid 80’s (found in the 1987 catalogue). Sculpted by Aly Morrison.

Both of these are of the FW1004 Skeletons” originally released early 1990s, and currently available from North Star Military Figures. Unknown sculptor.

The right one is missing the top of the spear. It works fine as a quarterstaff though. 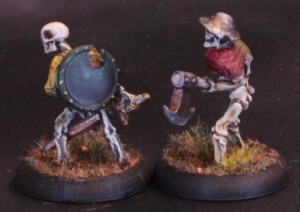 Both of these are of the FW1004 Skeletons” originally released early 1990s, and currently available from North Star Military Figures. Unknown sculptor(s). These two had a differnt texture on the integral bases than the rest, maybe a different sculptor. 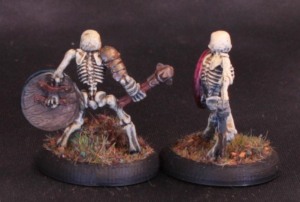 Both of these are of the FW1004 Skeletons” originally released early 1990s, and currently available from North Star Military Figures. Unknown sculptor. 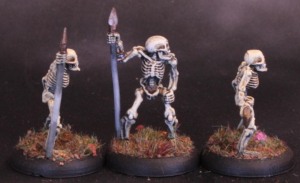 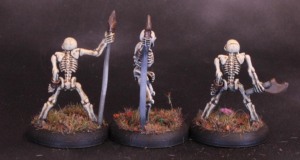 As I stated above, I have a few of the FW1004 skeletons from before, that were available from Harlequin Miniatures at the time (early 90s). Nick Eyre of North Star is presumably the same Nick Eyre that worked at Harlequin way back when.

I’ve got a bone to pick with you lot!

These were painted in November.

In other news, I have not really had much time to paint the last weeks. I am struggling to get the last round finished in time. I should make it, but I might have to reduce how many minis are in the squad in the picture. I have three of them finished, plus a driver for a vehicle.

Future LPL13-entries etc that I cannot post quite yet: 10