LPL round 6: Bring Out Your Dead!

Round 6 of the Lead Painters League has concluded. Here is my entry:

“Bring Out Your Dead!”

I envision this as a wandering band who collects the dead. Sometimes they need to make ther cargo dead first. Being death warmed over themselves, they do not know what else to do with their unlives. 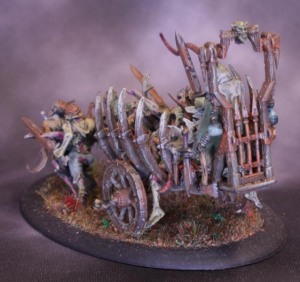 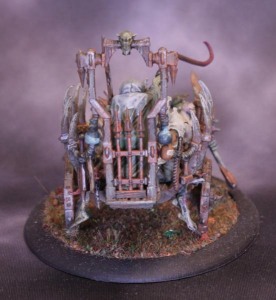 The main piece is the Corpse Cart, a plastic model from the old Warhammer Fantasy Battles Vampire Counts, or Age of Sigmar Death – Legions of Nagash faction, (and maybe others).

The astute reader will spot that there are bits missing, such as the bell, torches and/or fire pot. This is what can happen when you buy stuff second hand and prebuilt off ebay. What you see is what you get, bits might be broken off and alternative parts of the original kit are rarely included. They are often fixer-uppers as well. Luckily the missing bits are not really essential to the model.

I do not have the official base, so I made one for it and printed out in 70x105mm.

I actually have the original metal version of this (painted and with thick gloss varnish, and somewhere in storage) This is a small cart pulled by a skeleton ox, with a wraith driver, a pile bones in the back and with large cartwheels made of bone. The new version is much larger, and features zombies instead of skeletons.

Not much more to say, The corpse cart was rather sloppily built and had several broken pieces, so I had to pull it partly apart to get at mould lines and to put it better together.  Since I bought it several years ago it has languished in the Boxes of Doom™ only to be rescued for the LPL. Inspiration is key to get things properly done.

For the LPL I wanted to do the zombies below, and this corpse cart afforded the perfect accompanying piece for them.

From the C18 Undead Zombies and Undead Samurai lineups by Citadel Miniatures mid 1980s. (Names are to be found in the 1986 catalogue, most single minis had their own names back then).

Flayed Trooman to the left, Morgue Fiend to the right 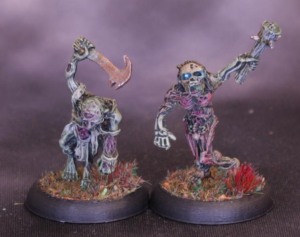 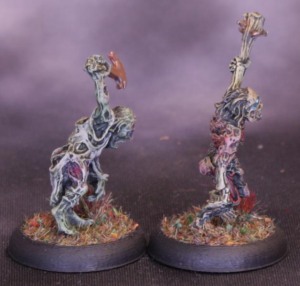 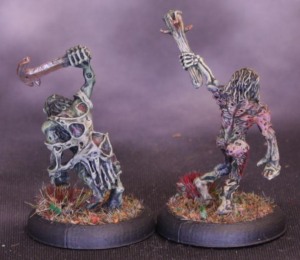 Brain Bower to the left, Peeled to the right.

Zali, from the C18 Undead Samurai range to the left, Skewsmee to the right.

Ta, from the C18 Undead Samurai range to the left, Slicegut to the right.

I bought these minis recently for a song from the LPL trade forum. The matching shield I had from olden times. The bases are 3D printed 25mm.

The walls and gate in the main picture are scenery bits from the Kings of War Vanguard main set, painted a few weeks ago.

Zombies are really easy to paint, mainly seeing as they are all drab, dirty and rusted. They are very forgiving when it comes to sloppy and imprecise brushwork.

On these I kept the gore at a relatively low level (i.e. dark and not shiny), as I find them not to be recently deceased. (I imagine the smell alone should be powerful enough to knock out or chase away most living opponents!)

I painted them partially as a batch, and did the skins in different dank tones ranging from pale blues and greens via creme to pink. Then I did the metals with Scalecolour Black Metal, drybrushed with Army Painter Lava Orange and old Citadel Hobgoblin Orange. What cloth there was in blues, greens and greys, Slicegut the Conquistador with yellow and red stripes befitting a spaniard. . Weapon hafts in browns, ochre and grey, and then some gore with purple and dark red here and there.

A wash (trying to avoid the metals) with thinned Citadel Athonian Camoshade and / or Army Painter Strong Quickshade, let dry. This gives the basic paint scheme its tone and definition. I continued each mini by drybrushing very lightly with a light grey. Then highlighting cloth, skin and other parts as needed with a fine brush. Metal parts got a very careful drybrushing with Scalecolor Trash Metal.

Finally the eyes in Vallejo Gamecolor Magic Blue, dotted with the same mixed with white in two thinned layers of different brightness to give that magic glowing eye-effect.

Bases with tufts and the autumn flock mix.

With 25mm bases as opposed to the typical 20mm bases zombies usually stand on, the models are not so prone to tipping over, and these 8 zombies fill a movement tray for a 10-man unit in Kings of War with the same frontage and just a slightly deeper footprint. Also, round bases make ranking up a breeze.

These were all painted in October.

made by Games Workshop

Future LPL13-entries etc that I cannot post quite yet: 20