Presently I am working on entries for the Lead Painters League 13, which kicks off come end of September. The league is a painting competition for the members of the lead adventure forum and participants are to send in a single photo of a coherent team of at least 5 miniatures each week starting late September and lasting until early December. Three of the rounds have special themes for bonus points, and the first round is “Gothic Horror”.

I need the first three teams ready to go in a few days’s time as those three are all to be submitted at the same time. Then there will be a couple weeks until the next ones need to go.

I had the first one ready, but then I decided to spruce it up by adding some more minis and make a scene instead of just bare minimum of minis standing around. The additions just arrived in the mail, are in the process of preparation, and will be undercoated tonight. .  I misread the rules there….There is a requirement in the rules that the first three teams all be new, it is just that bonus points for being new is not awarded the first three rounds. Oh well, the heat is on!  I have some ideas for entries that should be good if I can pull them off.  I might be biting off more than I can chew here though, and I do not have much in the way of ready scenery to set the scenes, as it were.

At any rate, the LPL13 entries cannot be shown off anywhere before the round they are entered in is over, so they will just have to wait for the time being.

However, in between working on the LPL entries I plonk away at some other stuff, to unwind a bit and to use paints left over on my palette, Not to mention to get the feeling of getting something done.

These scenery bits are from the Bones 2 and 4 kickstarters respectively. I did them quick in my go-to rock paint scheme. An uneven coat of dark greengrey over a solid black undercoat, followed by a heavy drybrush with a sandy yellow, and finished with a lighter drybrush of offwhite. Quick and easy! The colours give a much more satisfying rock finish than just using the typical monochrome greys.

Too bad the colours are not really showing properly up in the photos.

On each end are the Pillars of Good and Evil from Bones 2, the rest is the subset “Grave Things” from the Bones 4 core set. 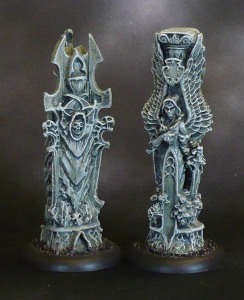 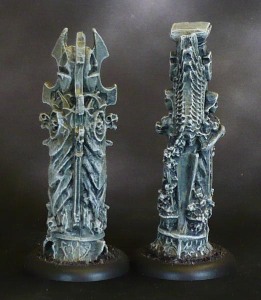 They are made in the older Bonesium PVC material, and as you can see it shows. No amount of the hot water trick is going to correct that warped listing there. I have not seen the metal versions so I cannot compare them with the Bones or even say that the metal ones do no list in the same way (though I doubt that they do.)

I would have thought it be more fitting if these came as a pair of each and not just one of each, but there we are. They are sold as single packs in retail anyway.

30mm round lipped based 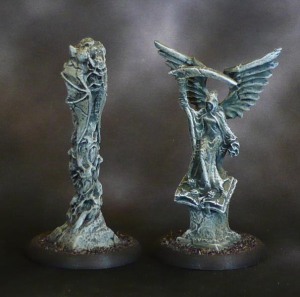 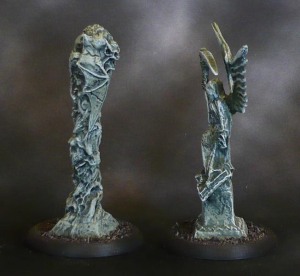 These are from the subset “Grave things” in the Bones 4 Core set. Listing again! I was unsuccessful in trying to unbend the batty one as it bent back over time. Should have left it longer in the hot water. Oh well. 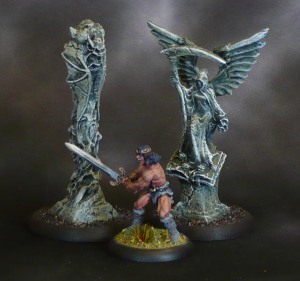 Again, they should have come in a pairs of each. 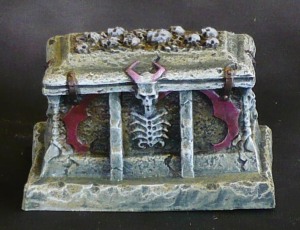 It seems Bones really is not the best material for boxes with square corners and all that…must be that corrupting influence of the Warp. 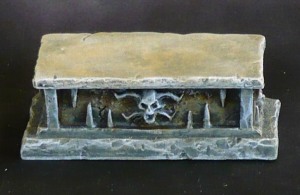 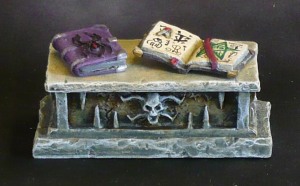 This one is OK and untainted by the warp though. The loose books are a nice touch. 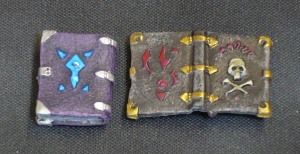 Tiny glyphs and imaginary writing that looks much better (and way more impressive) when not magnified, as does most of my painting. The page is actually about 10mm wide. The black symbols and all that are done with .01mm and .02mm pens.

klatoo…berata….nih*cough cough* Ok, then, thats it! *takes book, thunder rumbles* Hey wait a minute!  I said the words! I did!

40mm 3D-printed round lipped base on the statues 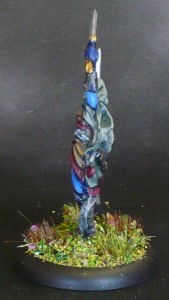 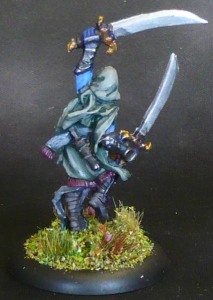 This one has been standing around half-painted for a while. The rule 63 Drizzt Do’Urden from Bones 2.

This model is quite nice from the front and back, but really flat from the side. Which is typical of originally made for single piece metal casting-minis. 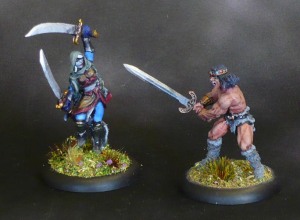 Your panther has made a mess of my carpet! Come clean it up! 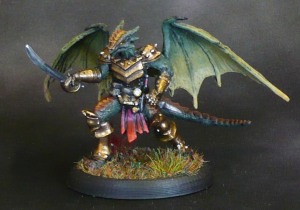 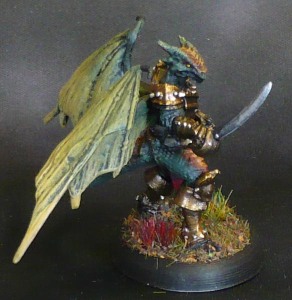 The Dragonman something from the Bones 4 core set. This mini actually comes in many parts and with a selection of different weaponry and hand-held things. I went with the bucaneery sabre and dagger on account of the high boots looking a little piratey.  Also, this is what the render shown in the KS looked like.

I went with a bronze / gold armour and my new darker flock mix. Turned out well in my opinion at least.

The base is a 3D printed 35x25mm lipped oval as I thought a 40mm round was too large.