Moving to the Tray of Miniatures that are Prepared And Ready To Paint #42, we come to this little group of Ghouls that are out and about with their Strigoi chaperone.

32 of the blighters including one earlier sculpt, collected from several different second hand sources in the course of the last year. Plus the later released Strigoi, nowadays known as a Ghoul King. The Strigoi was damaged, the lower jaw was broken off. I just painted in a couple of teeth.  A couple of the ghouls had replacement weapons, and others had different types of damage or paint-residue gunking up the details here and there.

The 1998 Ghouls, and still the best ghoul minis I know of: 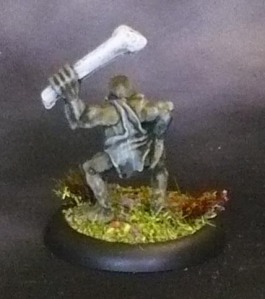 The single older one, from 1992. Quite nice albeit more lumpy than the gaunt 1998 ones.

How to paint: These are all rather quick to do, being mostly skin and not being very busy at all.

I undercoated black with a zenithal light gray with my airbrush. Then I did a handful of each in different pale-ish skin colours, keeping the zenithal.

Blue, Yellow, beige, bronzed flesh and some mixtures as I just put new colours in the arbrush without rinsing it out. In the end there were a lot of different hues going on.

When dry (or rather, months later when I got around to continuing them) I did the loincloths in a variety of different colours, while doing all the metal weapons in black, metal, orange then drybrush metal and pale orange; the bones in offwhite, lanky hair and the few rocks in a few fitting colurs, and skulls in bone, and tongues in electric blue, all this done in assembly line-style as each mini just needed a little of each colour.

Then came  wash of slightly thinned down Citadel Athonian Camoshade, the greenish brown one. When that was dry, I drybrushed very lightly with a light grey, and worked in addition a few of the colours up again here and there, such as all the bones. Black eyesockets with a single white dot makes for evil eyes. Also white teeth where present.

Bases and done. Simple and effective. I did the whole lot of these over a couple of evenings inbetween other things, plus the airbrushing took a couple hours or so way back when.

I do have a couple of units’ worth of painted Ghouls from before, and should now have enough to field a horde army of Flesh Eater Courts. I do need some heavy hitters to round them out though. And some of them are on small square bases. Maybe I will rebase them at some point. 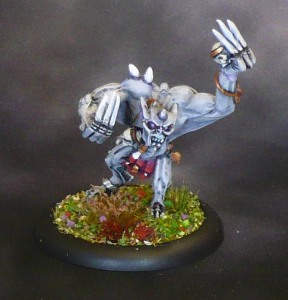 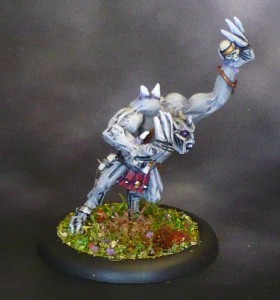 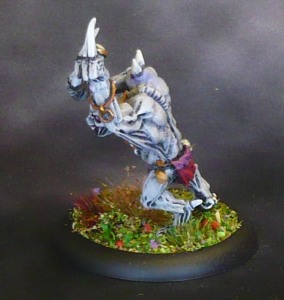 The Strigoi is a nice representation of the classic bat-were Monster Vampire and a fitting leader for the Ghouls.

This one was painted only with drybrushing and a bit of small-brush detailing up from a black undercoat, no washes used. 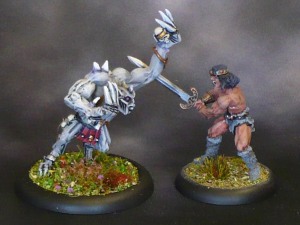 Larger than human, but not by all that much. At this point Conan wishes he has a pointy stick.

2002 Strigoi Vampire sculpted by ??? Anybody know?

Made by Games Workshop

No longer available from Games Workshop 😦