Beware the Jabberwock, my son (the ancient one!)

I have been mining my mountains of minis on the hunt for miniatures from last century to paint and enter in The Old School Fantasy Painting Party over on the LAF forum, I have uncovered a few nuggets of golden oldies I would like a crack at. However, whether I can manage to make time to paint them all is another question.

Back in 1983 or so,  Tom Meier (Original Allfather of miniatures sculpting) made a lovely Jabberwock for his company Ral Partha to be released as part of the range “Things that go Bump in the Night” (it was also released by GW in Europe).  I believe I bought this mini sometime in the early 90s but for some reason it never got painted.  Which -as it turns out- is a good thing, as then I could paint it for the old-school painting party: 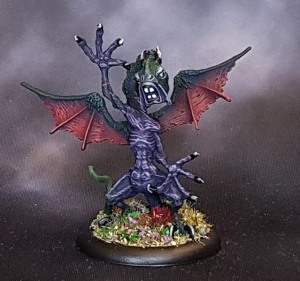 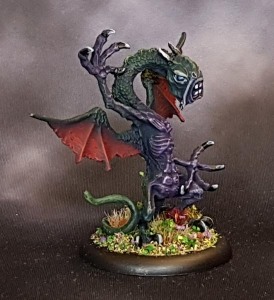 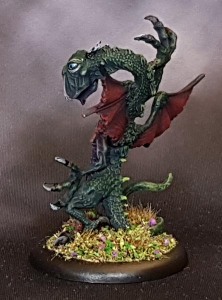 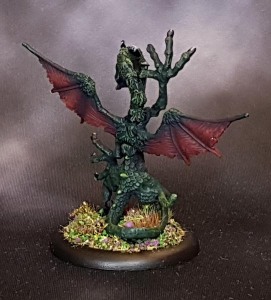 The Jabberwock, inspired by one of my all time favorite poems is by Lewis Carroll, author of Alice in Wonderland:

Jabberwocky
From “Through the Looking Glass”  (1871)

’Twas brillig, and the slithy toves
Did gyre and gimble in the wabe:
All mimsy were the borogoves,
And the mome raths outgrabe.

“Beware the Jabberwock, my son!
The jaws that bite, the claws that catch!
Beware the Jubjub bird, and shun
The frumious Bandersnatch!”

He took his vorpal sword in hand;
Long time the manxome foe he sought—
So rested he by the Tumtum tree
And stood awhile in thought.

And, as in uffish thought he stood,
The Jabberwock, with eyes of flame,
Came whiffling through the tulgey wood,
And burbled as it came!

One, two! One, two! And through and through
The vorpal blade went snicker-snack!
He left it dead, and with its head
He went galumphing back.

“And hast thou slain the Jabberwock?
Come to my arms, my beamish boy!
O frabjous day! Callooh! Callay!”
He chortled in his joy.

’Twas brillig, and the slithy toves
Did gyre and gimble in the wabe:
All mimsy were the borogoves,
And the mome raths outgrabe.

I love how all the words sound like real English words. To quote Alice “It seems pretty (…) but it is rather hard to understand.”

Made in Metal (lead)

Finished from the stash: 125