Nurgle has always been the Chaos power I found most appealing. With the advent of the Death Guard in the 40k 8th ed starter sets, I have started collecting a new 40k Death Guard army. Yeah, well. A massive fail of the willpower throw there.

So I have been building loads of the new models, making me sick to the very soul of scraping mould lines and the smell of plastic glue.

As a part of this project (and to get a break from the plastic  glue fumes), I am revamping some of my finished older minis, such as this classic squad of 7 metal plaguebearers I used in support of my old Chaos Nurgle Ratmarine army. 7 being Nurgles number, naturally all squads at that time was 7 models. However, 8th edition uses 10 models in a plaguebearer unit. And larger bases.

To update the squad I blagged three second hand plaguebearers in the same style off Ebay, and printed off a few dozen 32mm bases so I have some extra to rebase some other older minis I have lying around.

and painting of the three additionals in the same style.

When I originally painted them in this scheme, the idea was of them being walking bruises.

I believe I rushed the paint job a bit to have them ready for a game. The paint is more or less slopped on and I did not really bother with too much details or highlights. The new ones got the same treatment. 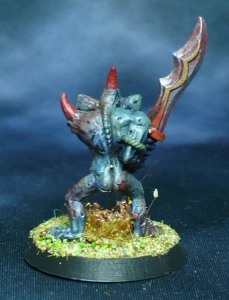 They did not take many minutes each.

I am happy with the results, the new ones appear to blend in well with the old models, making this a cohesive unit.