Finishing up units…here is the Mantic Kings of War Gargolyes. 5 of them, including the one I painted a few weeks or so ago, rebased to the standard 25mm square. For some reason I thought they had 20mm bases. At least with the 25mm base, they don’t keep tipping over all the time. 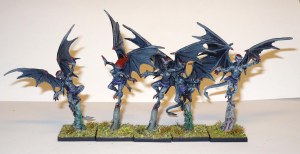 And it turns out there should have been 10 of them to make up a full troop, which seems to be the only quantity in the army lists.  but seeing as they are utterly horrible to rank up because of wings everywhere, I will simply use these 5 on a large enough movement tray to represent the unit.

At least until I get round to prepping some more from the boxes of unbuilt mantic models I have from their many Kickstarters. I think I have a few more in there.

Painted so far this month: 21