A Cosmic Horror, or: the smallest scaled model I have ever painted.

For some obscure reason the model “77115 Shoggoth” by Reaper features a big globe in it’s middle, as if it is on it’s back. It’s as if the sculptor started with a marble and tacked on some tenatcles with eyes. Don’t get me wrong, it is a nice, Lovecraftian model, but i find the marble a bit jarring. It is too large, to perfectly spherical. It simply does not seem to be a part of the creature, and I certainly do not think of Shoggoths when I see it. (if there had been several such globes of varying size held together with amorphous ectoplasm, well, YES! But just one is strange. I see most people paint them as large central eyes.

Not me. I try instead to give a sense of scale to the cosmic horrors that wish to break into our reality… 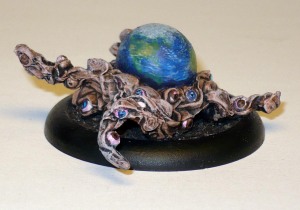 Painted so far this month: 22