This group of minis was originally painted with the LPL13 in mind, to fit the “Gothic Horror” theme of the first round. However, I would like my entries there to each tell a story of sorts, and this is just a line up of characters. Also the photography leaves something to be desired. I changed my mind and put these in reserve. As I now have a definite plan for each of the ten entries, these are not in reserve any more.

A take on some of the monsters of the 1930’s Universal movies series fame, with both male and female counterparts. I based the Mummy on a 35x25mm base as his integral base was both scenic and rather wide and I did not want to cut it down. The others are based on 30mm round lipped bases. 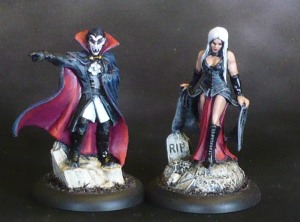 #133 & #132 Dracula and Draculine, Draculette, Draculea, or whatever the generic rule 53 version might be called. (She does not strike me as a representation of one of the Brides of Dracula, but rather a fully autonomous female vampire in her own right.) Again, representation clearly modelled on Bela Lugosi’s Count Dracula in the 1931 Dracula movie. Or maybe the sculptor Bob Ridolfi has been watching Sesame Street again…ah. ah. ah. ah. aaaaaah.

#130 & #131 The Mummy and his mummy. Or consort, or controller. Good representations of High Priest Imhotep and his beloved Ankh-Su-Namun for fans of the 1999 movie The Mummy. Or again, as Boris Karloff in the 1932 original The Mummy.

These were painted in September.

Future LPL13-entries etc that I cannot post quite yet: 23