A large mini ragepainted sloppyfast in under an hour just to blow off some steam and get it off the tray it has been standing around for ages on.

Well, large mini I say. Compared to most other dragons of the Bones kickstarters, this one is rather smallish.

However, back in the day when heavy metal was king, this mini would be considered a large miniature of a dragon. 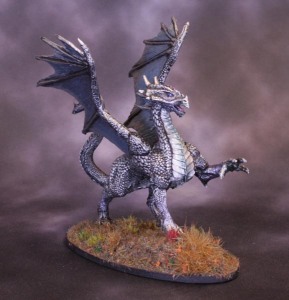 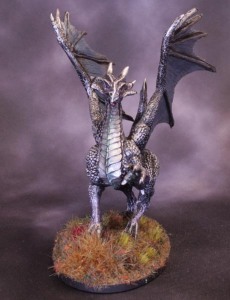 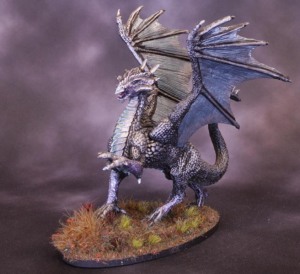 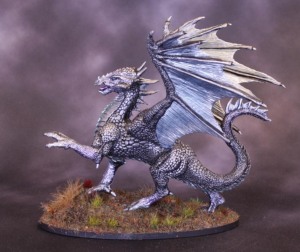 I based it some years ago on a 100x50mm wooden oval base from war-bases.co.uk. I could not be bothered to rebase it now, especially seeing as its’ integral base is warped, causing the front part of the base to rise up a centimeter or so off the ground. I vaguely remember struggling to flatten it with the hot water trick but failing as it went back to it’s warped shape over time (I have later learned that this means not hot enough water and not long enough in the water to reset it’s plastic memory).

I just stuck it to that larger base and filled in the gap with scraps of sprue, glue and putty. When the base is painted and textured this looks like a rise in the terrain which really does fit the mini nicely, so no worries.

How I painted it:

Then I made a mistake and used Amsterdam Oxide Black ink undiluted to do some lining. This turned out far too stark, and also since the ink turned out to be matt, it was not too appealing. I probably should have used a gloss black, and also thinned it significantly to make the lining softer and more blended.

Come to think of it, this dragon has that classic Y Ddraig Goch stance…

Dang! Should have painted it red! Oh well. 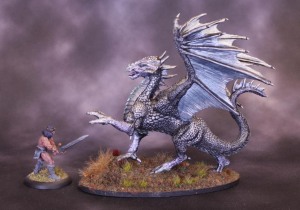 “Oi! You! Silvara! What ‘ave yer done with me mate Huma?”

Future LPL13-entries etc that I cannot post quite yet: 29