The Skyless Realms was a kickstarter for some .stl-files that funded recently and delivered just a couple months ago. The theme was buildings, scatter terrain and miniatures of several kinds that would typically found in the Underdark setting for D&D. Centered around spider-worshipping Dark Elves, there are a bunch of classic cave and dungeon monsters, Deep Gnomes, Gray Dwarves, lizardfolk and the obligatory tentacle-faced horrors that want to suck out your brains. A whole lot of stuff!

Here is a Rock Beast, which is meant to be a Xorn Earth Elemental monster from D&D, 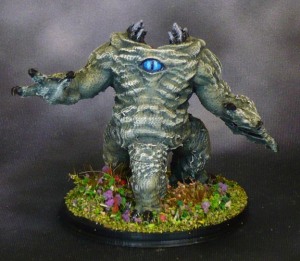 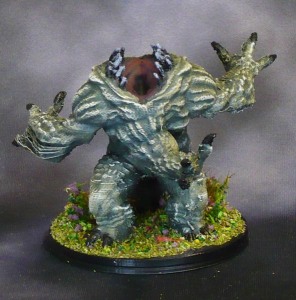 It did not print perfectly….the lower part of the arms were spaghetti as the PLA had not settled properly, even with supports. I just cut off the excess and carved the rest into shape. You can see in the pictures where it went wrong. 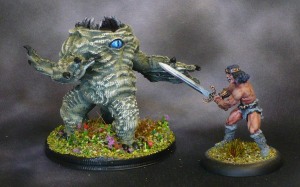 48mm integral base. Printed in one piece with supports.

I have used the default settings from the Flashprint slicer program I got with the printer. The setting I used on this is “Standard”, with 0.18mm layer height and 0.27mm first layer. Shell: perimeter 2mm, top and bottom layers 3mm
infill 15%, hexagon pattern, combine every second layer
print speed 60mm/s, travel 80mm/s
temperature 220 degrees C
enable supports, auto made treelike supports,
no brim or raft (the minis have bases, so they do not need this)