From the fourth Bones kickstarter (no, I have not received my shipment yet, not even a shipping notice). This minis was sold online and given as a freebie if you ordered for more than USD 40 from the Reaper site in February this year. When I ordered it I was not aware that this mini also is in the kickstarter. The January freebie owlbear was not a KS mini, so I assumed the Febuary one would be seperate too. So I will be getting another of this mini with the KS shipment.

So anyway…”Bones Black”. a darker grey, much harder, less unbreakable, and heavier material than the regular “Bonesium” Bones material. This new material was a bit of a surprise when announced not too long ago, as there was no mention of it in the Kickstarter. They have gone and produced many of the kickstarter minis in this new material (as in all the expansions, but not the core set). I understand that this material requires a different type of mould which is more expensive to make and maintain, so the Bones Black minis will be slightly more expensive at retail than comparable regular Bones. Reaper is on record stating that they chose the name as it sounded cool. The minis are not actually black, just dark grey.

My first impressions of the material is that it is actually quite similar -but not identical- to both Restic and the newer Boardgame plastic such as used in HATE. It is very hard and diffcult to cut or bend when at room temperature. I suspect there is ABS in the PVC mix here.

However, it still responds well to heat (near-boiling water) and goes rubbery soft and reposable just like other PVC minis. When soft, it is comparatively easy to slice with a scalpel hobby knife. Just like Restic, it needs a little time for super glue to grab, and when it does, it grabs firmly. It is easy to drill, and what little mould lines there were came off easily enough with said knife. Not quite as easy as polystyrene, but much easier than original Bones. They could actually be scraped, which does not work at all with regular Bones.

The troll came assembled, and needed gap filling. Reaper has also addressed this issue, stating that the new material has slightly different tolerances and shrinkage than the original Bones. They have been adjusting the connection points to compensate to avoid such gaps going forward.

At any rate, my impressions of the Bones Black material are mostly favorable. The biggest con would be that is seems slightly more brittle than the original Bones (that can be thrown around without taking damage), but I have not had any issues with neither this Troll or the Owlbear, so I can’t really say.  When the KS arrives I will be able to look at many more minis in this material, so we shall see whether this will be any issue.

The quality of the details do seem to be rather better than earlier Bones, and this is the reason Reaper has introduced the material in the first place. Again, the smaller minis from the KS will be the proof of the pudding. 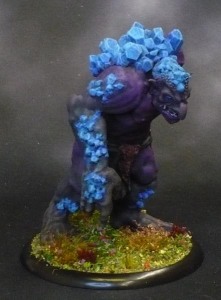 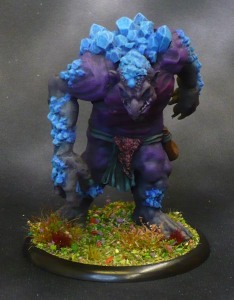 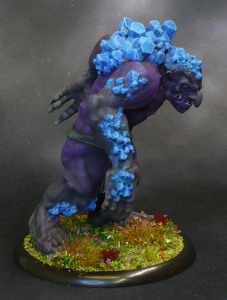 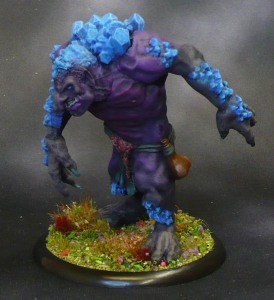 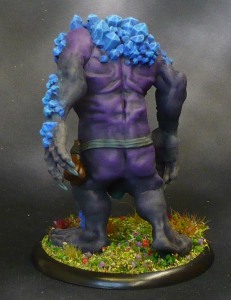 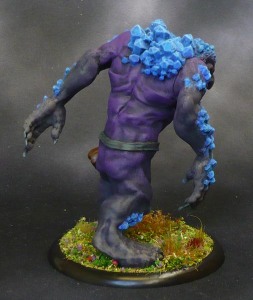 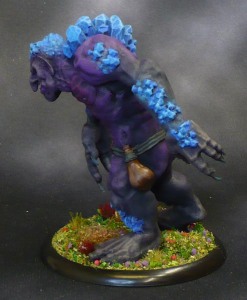 And it is BIG! Actually as tall as the Storm Giant, and larger then the new GW Rockgut Troggoths (aka stone trolls) 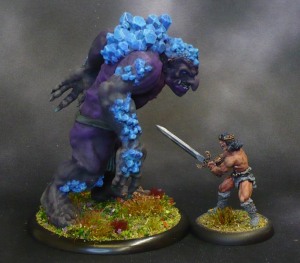 A quick and sloppy paint job. I started with a black undercoat, and painted the whole piece with a very dark blue. Then I drybrushed the trunk of the body with three different purples, with red on the stomach and chest. I drybrushed the arms and head with Vallejo Nocturna Shadow and ditto Cold Flesh, the belt and loincloth also in Shadow, with Deep Forest Skin for highlights, mixed a bit on my palette for a couple of shades highlighting. The claws and nails were also done in the greens. The leg of cured meat or large pouch (you choose) in browns.

The crystals and eyes I did in Scalecolor Tesla Blue and Carribean Blue with Reaper Aircraft Grey highlight. This was a bit sloppy as seen in the photos.

Base as usual, and it turns out my new Vallejo Black is really glossy.

All in all the mini took less than an hour to paint.

Will be available from reapermini.com at some point in the future when it goes on general retail release.