You know what to listen to for this:

And they* said 3D printing poses no threat to traditional miniatures…

well maybe not yet, but still: 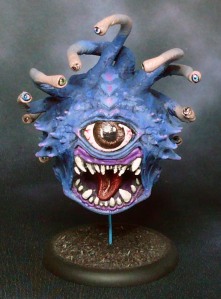 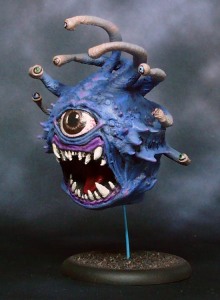 This is a 3Dprint I printed out myself on my cheapo Flashforge Finder. Printed in PLA with .08mm layer height. I scaled it a bit randomly to make a large one.

The original model is by Axolote Gaming, an unexpected bonus item from their second Kickstarter, and also one of the better models of a Beholder I have seen yet.

You can see the stepping from the printing process if you look closely. This is particularily obvious in the teeth and the eyeball as.the gloss varnish I used on the eye really made the stepping apparent. It was not half as bad before.

At any rate, the stepping is really only apparent when looked at closely, or when magnified such as in the pictures. The fangs are a bit misshapen here and there, mostly from my printer not being all that great. I have not used a file when prepping, just clippers and a sharp hobby knife. Maybe a file would have straightened those teeth out properly. Something to try next time.

The tentacles are hollow as their cross sections are to small to include any infill. This means they are quite brittle and prone to snappin off. Luckily only one of them broke during the removal of the supports though.

My printer also left a lot of extremely fine hair-like strings attached to the finished print, so together with removing the print-supports there was quite a lot of prepwork.

At least I did not have to wash it to get rid of the mould’s release agents, as I have realized the truth: there is no mould. 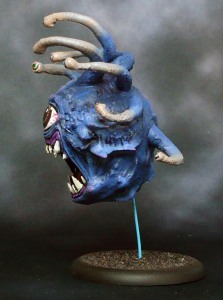 A note about painting 3D models: Neither drybrushing nor washes are good techniques for them, as the stepping will get accented and more pronounced. (and here I am with drybrushing and washes as my favorite techniques… argh!)

and to make the size apparent:

I used a 50mm lipped base with a paperclip to make the stand.