From the first Mantic Kings of War kickstarter, they made some Heroically proportioned Mummies. Which was a bit strange, as most other minis were closer to tru-scale 28mm and hence much thinner and with smaller weapons etc. Mantic has never been very consistent with neither scales nor styles.

Also, they were much more armed and armoured in a more Western and not quasi-Egyptian style as everyong was used to from Warhammer. And they were restic.

This of course led to a lot of complaints and badmouthing all across teh internets.

For my part, I quite like the more Draugr-like style of these. Also, I tend to prefer the heroic scale. 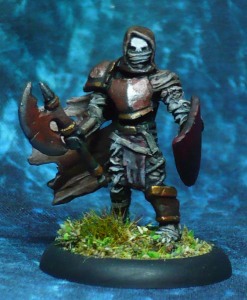 But they had 20mm bases, and ranking them up is a nightmare. After prepping, they have been standing around in the to do drawer several years now.

I got one out of storage and rebased it on a 30mm base which I think it fits so much better!

from Kings of War – undead faction