Putting the Fun back into Fungus: Mushroom Men

With the release of the “Into the Breeding Pits” dungeon expansion for Frostgrave, there is now a second random encounter chart to make monsters for!  Featuring such clear and present dangers as bands of Gnolls, those classic skeletons, zombies and ghouls, dungeon staples such as giant rats and sewer slime, larger monsters such as minotaurs, trolls and various demons,  we also might encounter the Violent Fungus!

Eat one of these to grow to giant stature! 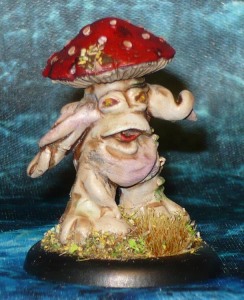 As an aside, the popular myth of the classic red toadstool as the battle frenzy-inducing drug that Viking Berserkers ate before entering the fray has been thoroughly debunked, as the high that you get makes you uncoordinated and really bad at fighting.

Painted so far this month: 11