Even more off the shelf of shame…

This unit of 5 Wraiths came as a part of the undead army I bought through the first Mantic Kings of War kickstarter.

They were also some of the first minis I got (together with some undead mounted knights) that were in restic. I had never seen, nor did I even  know about restic and struggled a bit with the material before I came to terms with it. Now I actually prefer the material to metal for ease of work, but it is annoying to clean mould lines as they cannot be scraped off as with metal or polystyrene plastic.

I started them some time ago, and quickly lost interest as they really are not very good models at all. They are mostly one piece, but like with most early Mantic restic the mould lines are badly placed -often down in hollows or across vital detail -such as the face(!)- making them almost impossible to get at, and therefore very difficult and frustrating to clean up.

So now they are done. I think I managed to get them presentable at least: 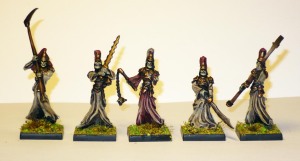