The Others: 7 Sins: Envy

The box full of the Others: 7 Sins models got a visit determined by the dice gods of the Shelf Game.

I picked the Envy Avatar and Abominations, leaving Pride and Lust and the Gamma Team expansion models for another day.

Three different failed paint schemes later, they ended up like this:

Another case of “just finish them already!” I found these to be a bit of a slog to do. At least they are out of the way now.

On the back of the percieved slog, I think I might revisit the shelf game concept; forcing myself to paint stuff I am not inspired to do is probably not the best idea I have had, especially since I recently have had so limited time to paint. When I find myself putting off painting in favor of doing something completely different, like replaying a game I already have put far too many hours into…maybe I should -at least for now- go more with the flow and try to find inspiration for any given model before sitting down to paint it. If it is not enjoyable to do, why do it at all? Also, the minis end up with uninspired, objectively bad paint jobs.

The Avatar of Envy: 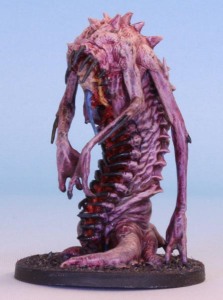 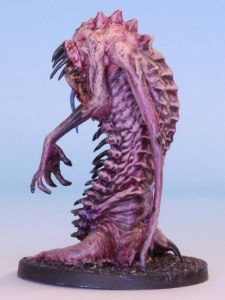 This is one reason I am not a fan of preassembled minis: the entire front of this mini has a lot of visible detail beneath rows of teeth/horns/whatever those spiky bits are. My word, those were annoying to get any colour past, and I gave up trying to paint in the back teeth. Those front fangs were just so very much in the way!

The Avatar has a 45mm base. which for some reason the model is not centered on.

The Abominations of Envy:

All the 7 Sins in this game are weird and original, and dare I say it, Lovecraftien, takes on the seven sins. But? What on God’s green earth makes these things represent “Envy”? It boggles the mind. (Which might be the point come to think of it.)

Just to give a sense of scale here.