Doing the Young Owlbear made me want to do this old one as well.

This owlbear is the O.G. owlbear off the very first of the Reaper Bones kickstarters. It always was a bit weird and extra insane looking, quite different from other owlbears I have seen.

Also it was droopy and askew on it’s base. I drilled into the leg from under the base and inserted a long rod to keep it stiff and keeping the talons off the ground.  Straightened that *** out,. Far too much as it turned out. So I glued the original base to the new one at an angle. Maybe the angle  should have been even steeper as it is a bit up in the air.

At any rate, insane-looking owlbear = joker = clown = parrot. Time to break out the Napoleonic colours. 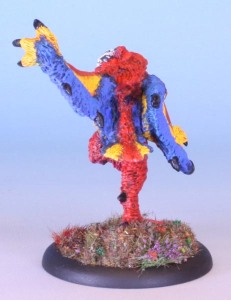