HATE is a big box board game by CMON based on the comic book series “Chronicles of Hate” by Adrian Smith, who happens to be the art director for CMON. Funny coincidence right there for you.

Kickstarted by CMON in January 2018 and delivered first quarter 2019.

I have not read the Chronicles of HATE, however what I have seen of it certainly does pique my interest. The art is done all in black and white, with lashes of blood red here and there.

Adrian Smith is best known for his artwork for Warhammer and Warhammer 40.000. The peoples of the HATE comic series are easily interchangeable with the inhabitants of the Chaos Wastes in the northern parts of the Old World of Warhammer fame. The many miniatures from this game are basically variations on the Chaos Marauders and Chaos Warriors theme. Straps and leather, muscles, spikes and murderous weapons all around.

Which is not a bad thing. I like it, so I backed for the game and a couple of the expansions. I did not get everything though.

The Tribe of Sarrassa is one of the expansions. As I do not expect to ever actually play the game, I have spurned the coloured bases and done them all in my usual meadow-like base style. I should probably have gone for a more dark tone in keeping with the very dark theme of the minis, but there you are. Contrast seems to be the name of the game these days. 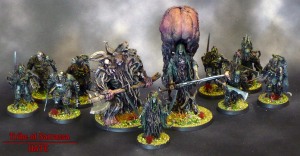 As I said above, I have not read the comics, so I do not know much about the plot, the characters, the world and all that. I understand that it is an incredibly brutal and violent place where tribes constantly fight each other. (much like the Chaos Wastes there, then) and that the different tribes have certain themes to tell them apart.

The Tribe of Sarrassa is actually what cinched the deal for me to pledge. Something about these is really interesting. Plant-infused undeadish types? Swamp warriors? Forest Fiends?

Not all of these seem to be completely flesh and blood, there are a lot of roots, branches and skulls going on here, And the Prince seems to have an Overlord riding on his back… 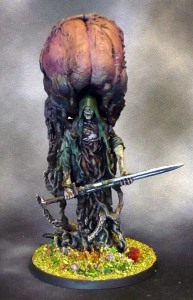 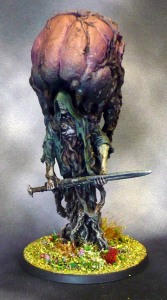 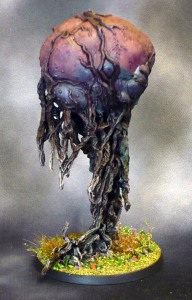 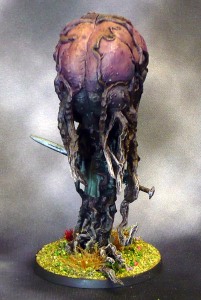 So…what is it? The Wings of Chaos? The largest pimple in existence? The Prince’s brain external? A death-plant-symbiote? Organic Parachute? Mutant hair? Alien mind-controlling device? Actually an Overlord? 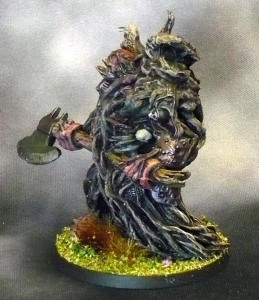 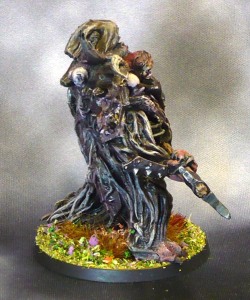 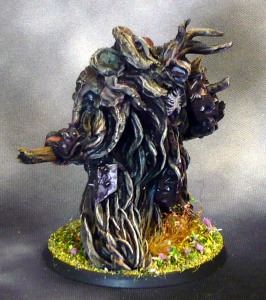 The Champion, in contrast, seems perfectly normal. For a burly bunch of roots entangled and animated to become a murder monster, taking revenge on the two-legs with their own axe of wood-chopping, one limb at a time…

I don’t know what he is called, so I have named him Bran.

The Prince and the Champion are both on 45mm bases. 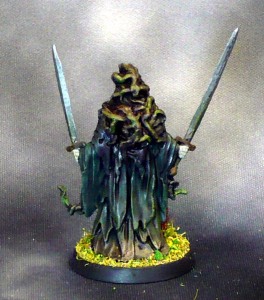 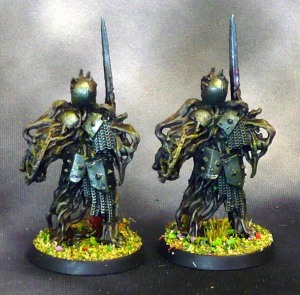 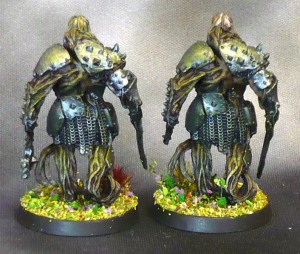 Warriors. One of these had a broken weapon that I did not notice at first. Too late to complain about it now. No matter. 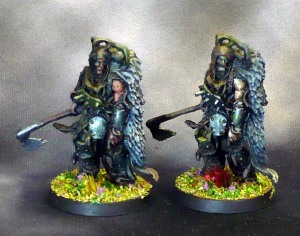 Notice how the youngbloods are the most flesh and blood humans of the lot. I expect the whole tribe start out as base humans and turn more and more into undead plant-warriors as they age and/or are reanimated.

Warriors and Youngbloods are on 25mm bases.

How I painted these:

I started with a black undercoat for all models. I use Vallejo Black Surface Primer through my airbrush. The Prince was in addition given a zenithal layer of white primer on the top half of the balloon thingy ( I will call it “the tumor” for short), leaving the rest black.

Next I painted in all the metal bits with Scalecolour Black Metal (a very dark steel metallic). Then I heavily drybrushed most of everything apart from the tumor with Scalecolor Arbuckles Brown (a dark, reddish chocolate brown). I was really sloppy and used a large brush so alot of the metal became brown at this point as well. I brushed the brown with a couple layers, each time lightening the colour by adding a pale bone and going easier on the brush for each layer, thereby creating a certain blending or colour transition effect, ending carefully with very dried off Citadel Ionrach Flesh. Then I went in with some Vallejo Nocturna Shadow ( a greenish black or blackish green), followed by Team Yankee Warthog Green (dark yellowish olive green), mixing a bit as I go, ending with some thinned Scalecolor Goblin Flesh (an intensly bright green) here and there.

I went back and highlighted/fixed most of the metal with Scalecolor Thrash Metal (a yellowy tinged steel metallic). The tumor was painted dark green from the bottom, and a flesh color (I don’t remember which. it might have been Citadel Cadian Flesh or Vallejo Nocturna Natural Flesh) from the top.

Skulls and Bones painted with Citadel Flayed One Flesh. Some of the warriors and the youngbloods where showing some flesh, so they got some different flesh colour here and there.

When dry I gave the entire tumor a wash with Citadel Druuchi Violet followed by Citadel Athonian Camoshade making sure to blend the middle bits properly and letting the camoshade get the upperhand on top, keeping a tinge of the violet. I give the Champion the same treatment.

When dry, a bit of drybrushing knocks the darkness back a bit (everything is still on the dark side)

Then getting some dark brown and the olive green in on all the wayward roots and branches that cover all the models here and there. Skulls and bones highlighted with Citadel Ionrach Skin.

Eyes were dotted in with Reaper Copper Verdigris followed by the thinned Scalecolor Goblin Flesh.

I used different coloured tufts on each model in a pair so I can differentiate them if nessecary in game.

HATE the board game

HATE is a kickstarter exclusive game, not for general sale in retail stores. I expect ebay is chock full of scalpers flipping the bits for exorbiant prices. I have already seen a few examples on forums here and there.