Minivember: Alabama Smith, or was it North Dakota Baker?

The LAF forum has for some time been running the Back of Beyond painting club, and I would have liked to enter something if only I had a Back of Beyond-themed mini to paint.

The theme being “Russian Civil War and Central Asia in the 1920s. Thus you may post everything about RCW or any rumbles at the time between 1917/1918 and 1930 in the far regions of Central Asia, included Mongolia, China, Far East, Tibet, NWF etc. And we’re talking here not only about historically correct stuff but also about some Pulpish interpretations of scientific expeditions in this area, e.g. adventurous scientists looking for lost treasures of ancient times”.

But…after reading that again it finally clicked in my head.  “adventurous scientists looking for lost treasures of ancient times”… Wait a minute! I have a Bones mini that fits that bill! 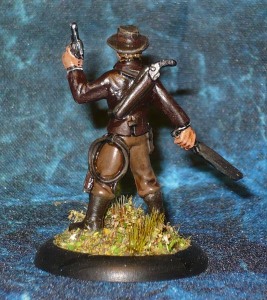 Officially named “Frank Buck” I think something along the lines of “Mississippi Harrison” or “Oregon Ford” would have been more appropriate. This is by all accounts Henry, the Raider of the Lost Ark himself,

Painted so far this month: 32