I play some DOOM every once in a while, and every time I do I think of Sedition Wars (because, let’s face it, the inspiration is apparent.)

Making up my mind to do something about it, I set out to try and make a speed paint version of the Doom Slayer colour scheme. This was the result: 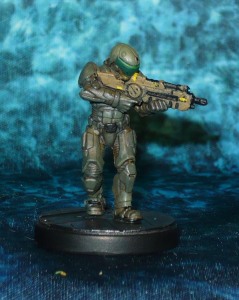 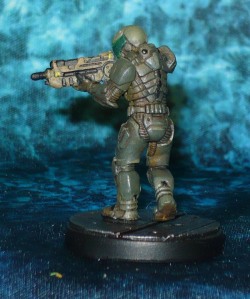 Starting on a black undercoat, a two-tone brown/leather brown base coat. Olive heavy drybrush, then lighter yellow olive drybrush. Desert tan gun casing and a mix of yellow olive and desert tan for helmet and details. Some black and yellow for bits. Angels dark green on the visor, and just a few line highlights here and there.

Since the Sedition Wars kickstarter rewards turned out so dissappointing for many backers, the game and its minis have been consigned to oblivion it seems.

McVey Studios apparently have dropped the line entirely, to concentrate on making minis for others. (as in The Others: 7 sins game and such like).

For my part, after getting over the surprise of “premium plastic minis” turning out to be restic, I found the Sedition Wars mins to be quite nice actually. After growing familiar with the material, I find I do not agree with all the internet hate directed towards restic. It is good for it’s use. The Sedition Wars minis also prove that the material can make really good minis.

At any rate, after spending a lot of time prepping all that restic, they have been consigned to the drawers of doom with heaps of other KS minis like Dreadball, Deadzone and Mars Attacks!.

I originally thought I would like to do the Vanguard Troopers like Stormtroopers, all in white and black. Since white and black are inherently hard to do, at least quickly, I put them off and off and after a while moved on to other things.

Also, I think these will do nicely for Enforcers for Deadzone and Warpath.

from the Sedition Wars: Battle for Alabaster game set.

(if you can get hold of a copy, do so! Great minis even though the game itself was a bit …untested.)

Painted so far this month: 19