My Resolutionary Challenge for March

I managed to keep on track for this, even when being so flighty as I am. Seems to be a recipe to get something done.

For March I think I want to do something about squads, teams or units. As in squads I have started (i.e. done a test piece) but not completed. I seem to have rather a lot of them cluttering up the shelving.

So I think a manageable challenge will be to paint 4 squads during the month, with a minimum of 10 models in each (counting the test piece), or equivalent numbers of new painted minis to fill up squads, teams or units I already have some models for.

So, at least 36 miniatures, then. That needs an average of 9 minis a week, or one every work day, two each Saturday and Sunday. Of course, I will not be painting these singularly, but in batches. Better to think of it as a unit a week.

There will be at least one weekend this month I will be otherwise occupied, so good thing I got the first squad done during the first day of March!

Ten more of the big unit of converted Mantic sci fi zombies I started in January. As I have something like 50 of them ready for painting, I expect more of these will be used to fill out the numbers if needed. 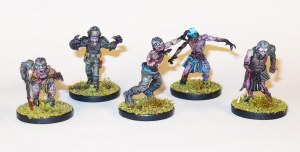 I get clearer pictures with not so many in the frame at a time.

If you think some of the bitz’ are somewhat off scale, it is because the Deadzone Plague Zombie parts are more “heroically” proportioned ( = thicker/ larger) than the older fantasy and warpath minis.

And we also have our first Bonus mini!

‘Cause I love fish sticks!

This piece has a ridiculously small diameter shaft-part connecting the axe-head to the hands. It bends all the time, and will most probably snap at some point and be really difficult to repair. Apart from that niggle, I think it is a great mini.