The Horde is done! (for now) 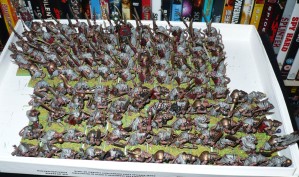 119 of the blighters. One is missing, as it flew off its base and dissappeared in my garden somewhere. I am currently painting up a replacement, bringing the horde up to two regiments of 60 clanrats or slaves. So that is four such regiments done.

The clanrats are all bought off Ebay in several batches. Many were missing arms, so they were replaced with old style skaven arms from the bits box. Also there were not enough of the new style clanrats to fill the ranks, and I had to put in four (shortly to be five) of the really old white plastic skaven warrior models from the late 1980’s “fantasy regiments” set. (Number two from the left.)

I have quite gone off of painting skaven for the time being, thank you very much.

But I did paint this yesterday:

Original Rat Ogre, from the first series of skaven. I like that they are just really big skaven and not steroid-mutant lumps as the current ones are. I think I might have the other one somewhere in the old figure storage boxes.